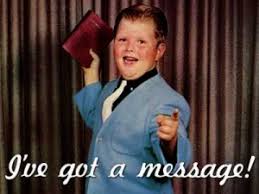 Evangelism is the declaration of good news.  “Evangel” was not originally a Christian word but there is certainly no better word to describe what Christians have to declare.  A fleet-footed messenger would return from the battle lines to declare the good news of victory.  Christians declare the triumph of Jesus over sin, death and hell.

Evangelism has become quite an industry.  There are resources, tools, tracts, books, pamphlets and bracelets for nearly any occasion.  Like any tool, these resources can become crutches.  A Christian can be well-versed in the gospel even if they are not well-steeped in it.  Nevertheless, we do well to avail ourselves of anything that would steady our minds and ready our tongues for the announcement of Christ’s victory.  These resources help us clarify what exactly the gospel is.  What is it exactly that must be shared and believed if one is to be a Christian?  We prepare ourselves to stay on track (or tract!) so we do not wander, and consequently lead someone else, from primary matters into tertiary ones.

As helpful as these tools can be, we can unassumingly make evangelism a one-size-fits-all effort.  We have our go-to presentation, making it difficult to consider the myriad of personal contexts of any given evangelistic opportunity.  It’s like the vacuum salesman who is so worried about losing a sale that he rarely veers from his canned pitch.  He does not adapt well and becomes quite rigid.  His vacuum may treat carpet stains, but that not good news to someone who has hardwood floors.

Evangelism is not salesmanship by any stretch of the imagination.  But we should pay close attention to the personal contexts of those to whom we declare Christ’s good news.  We have one gospel to share.  It must be shared and believed if anyone is saved.  But how we stress the goodness of that news requires careful attention to the spiritual condition and context of our hearers.

The Indifferent (John 4)
Jesus insisted on a day trip through Samaria to meet a tramp at a well.  She was working toward her sixth marriage when a man from Galilee dared have a conversation with her.  Jesus held himself out to her as Living Water that would forever quench the thirst of her heart.

The woman at the well was quite indifferent to her sin.  She even acknowledged Messiah was coming someday to sort out all religious confusion (v25).  In the meantime she thought nothing of her sexual immorality. If she really believed Christ was coming one day we might expect her to be far more concerned about what she was doing.  Whatever she believed about the coming Christ meant very little to her in five trips to divorce court.  While other folks fight worship wars about mountains, she had men to please.

Jesus declared the good news that the Christ “is coming” and “now is” (v23).  She did not have the luxury of indifference.  She did not have any more time to waste.  Worship was never ultimately about mountains but about spirit and truth (v24).  After exposing her for who she was Jesus declared God was seeking true worshipers and she was in his sights.  She ran to tell her townfolk who she had found.  Better yet, who had found her (v39).

To the spiritually indifferent, the oh-it-will-all-work-out-in-the-end folks, we declare the current and glorious reign of Jesus Christ.  Those who consider religious confusion no reason for urgency must know the hour “now is” for their salvation.  They neither have the luxury nor the liberty to wait any longer to consider Christ.  God holds out to them eternal life, soul-gushing Living Water, and when Christ returns it will have been too late to choose sides.

The Self-Righteous (John 6)
Jesus met a far different audience in John 6.  Torah wonks and scribes dogged Jesus’ steps.  And they had led many to believe they were in God’s kingdom because of their lineage, circumcision and teetotaling Torah-keeping.  Of course they were God’s people.  Why wouldn’t they be?

Jesus declared the good news that God alone determines who are his (v44).  And God’s people are only and always those who come to Christ by faith (v37).  That is, one can have all the religious pedigree in the world, all the Sunday School pins, all the Bible Drill ribbons and be a 137th-generation preacher, but if you do not feast on Jesus Christ then you have no place in God’s kingdom.

Jesus declared the good news that no one is to presume upon God.  No matter what any religious pretty boy says to you, if you come to Christ then you are God’s forever.  Going to Moses for salvation was a fool’s errand.  Every Jew must come to Jesus, the New Moses, and Living Bread (v32-33).

You may feel saved, live happily ever after, escape a car wreck or befriend the pastor who visited you in the emergency room.  But none of that is grounds for assuming you are actually God’s child.  God’s children all, without exception, come to Christ.  And Christ secures all of them without exception.

So radical was this to the John 6 crowd that most threw in the towel (v66).  Jesus practically taunted his disciples to do the same.  Jesus did not present an easy-believism.  Coming to him was to eat his flesh and drink his blood (v54).  That’s what following Christ means and there are many who assume themselves shoo-ins who will bail when the gospel demands too much.

To the self-righteous, they who assume themselves heavenbound because why wouldn’t they be, we declare they are not the arbiters of God’s salvation.  God does not depend on them to decide if they would be saved.  No, they depend on God to decide to save them.  And they will know they are heavenbound when they renounce any claim on Zion save the work of Jesus Christ on their behalf.

The Convicted (Luke 7.40-50)
Jesus told his disciples a parable about what it means to be forgiven.  Forgiveness and love have a direct relationship.  The more that is forgiven, the more the forgiven one loves the forgiving one.

They were at a Pharisees house when a wench shattered her heirloom perfume vial to wipe Jesus’ feet.  Jesus knew this was a woman on whom his Father had been already working.  She had been brought to utter humiliation and risked what little reputation she had to honor Jesus.  Only God’s children do that.

Jesus talked about her and used her as a sermon illustration in front of a roomful of men (vv36-47).  Imagine the whole room talking about her while she, undeterred on her face, feverishly and tearfully anointed Jesus with her ancestors’ priceless perfume.  She did not care what anyone said.  She had met her Forgiver.

The only word Jesus spoke to were the words of forgiveness (v48).  He knew no one would love him like that unless they’d been humbled by their sin and forgiven by their God.  He was soon to assume all the shame of and judgment on sexual immorality.  Therefore, he could declare the woman free from her debt.

To those under conviction, those brought desperately low by their sin, we declare God’s forgiveness in Christ.  Jesus has taken on their sorrows, bore their shame.  By his stripes they are healed.  Those with nowhere else to hide, nowhere else to go, no one else to beg, should hear the promise of God’s forgiveness.  They will finally know love when they know Christ.  So we hold out to them the Compassionate Savior who will hold them up as trophies of grace before the self-righteous.

Evangelism is not about sharing a plan of salvation.  It’s about sharing the Man of salvation.  A Person, not a pitch.  Pay attention to the groundwork God has already laid so we can use the right fertilizer.  To the indifferent, stress the urgency of Christ and the hope of real life now.  To the self-righteous, declare the sovereignty of God and they depend on his decision, not he theirs.  To those weighed down by guilt, declare God’s forgiveness in Christ.  Jesus really justifies the ungodly.

Whatever the context, whoever the person, leave them wide-eyed with Jesus.  All God’s children will surely come to him.