Then God said to him in the dream, ‘Yes, I know that in the integrity of your heart you have done this, and I also kept you from sinning against me; therefore I did not let you touch her'” (Gen 20.6). 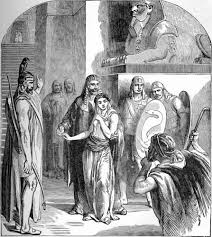 Though credited with righteousness for his faith, Abraham did not always live up to the hype.  He was frankly a sneaky man with a trophy wife (Gen 12.11).  He was righteous alright, but only because God was gracious to consider him so.

After God promised him bright and international heritage (Gen 12.1-3), Abraham and family meandered down to Egypt to escape a famine in Canaan.  He knew Pharaoh would take a shine to (then) Sarai because men always ogled her at restaurants.  And what Pharaoh wanted Pharaoh got.  So Abraham resigned the fact he would lose his wife to Pharaoh.  Of course, to lose his wife also meant to lose his life (Gen 12.12). Pharaoh was too noble to steal another man’s wife unless, of course, that man was dead. He was above adultery but not murder.  Technicalities.

Crafty Abraham had a plan, though.  Convince Pharaoh she was his sister and he would at least save his own head.  “Righteous” Abraham sold out his wife to Pharaoh’s harem “so that it may go well with me because of you, and that I may live on account of you” (Gen 12.13).  Whatever faith Abraham had, he didn’t believe God could keep his promise.  God was no match for Pharaoh’s libido.  Abraham believed he would live on account of “Sister” Sarai rather than Yahweh.  If God had eyes he most certainly would’ve rolled them then.

God proved himself able to manage Abraham’s well-being despite the shenanigans.  He plagued Pharaoh’s house until he returned Sarai to her rightful place (Gen 12.17-20).  God has a habit of punishing those who try to own what is given only to his people (cf. Exod 7-12; 1 Sam 4-5).

Would to be a fly on Abraham’s donkey on that long journey back to Bethel (Gen 13)!  “So, honey, how was your stay at Pharaoh’s place?  Were the other gals in the harem nice?  You know I did what I did for us, sweetheart.”

Fast forward past his son-producing affair with Hagar (Gen 16), his rather painful reminder that God lovingly owns him (Gen 17) and the takedown of Sodom and Gomorrah (Gen 18-19).

Abraham hauled his estate into Gerar, where he was sure King Abimelech would, like Pharaoh years earlier, take a shine to (now) Sarah (Gen 20).  God had already guaranteed Abraham a son by Sarah (Gen 17-18).  Therefore, unless God would commit theocide, Abraham could not die until he and Sarah had a son together.  Nevertheless, Abraham invoked Operation She’s-My-Sister again, something 20.13 indicates was a regular scheme. Sarai was quite the knockout in her younger years and Abraham quite the faithless coward. King Abimelech fell for it and Abraham slept alone.  Alive, but alone.

God did not visit Abimelech with plagues like he did Pharaoh.  No, this time God showed up in Abimelech’s dreams.  Return Sarah or you’re a dead man (20.7).  Abimelech pled ignorance.  He did, of course, take her on good faith she was Abraham’s sister and there was no DNA test available (v5).  God conceded the point but didn’t let Abimelech assume he was taking the high road.  The only reason Abimelech didn’t touch Sarah was because God restrained him (v6).

No one, not even frisky Pharaoh or lusty King, would impregnate Sarah except for Abraham.  They very well could have any other woman they wanted but they wouldn’t have God’s woman.

Abimelech took Sarah to have sex with her as part of his royal privilege.  But he didn’t.  Was it because he never slept with woman on the first date?  Of course not.  God orchestrated whatever means he pleased to keep him from touching her.  Maybe Abimelech had a migraine or ran out of blue pills.  Whatever the case God protected Sarah’s one-flesh union with Abraham even though Abraham clearly hadn’t.  Abraham had a prior son (Gen 16) but Sarah would have his only son, his beloved son (Gen 22.2).  God was saving Abraham (and us!) even though Abraham (and we!) didn’t know he was lost.  God would be Sarah’s faithful husband even if Abraham was her pimp.

Even when Abraham’s scheme was uncovered he still tried to weasel his way out using a loophole.  Instead of owning up to and repenting from his selfish deception, he admitted that Sarah was actually his half-sister and was therefore not technically lying (Gen 20.12-13).  Right, Abraham, right.  And Abraham even had the gall to justify his deception by assuming there was no fear of God in Gerar (v11) and therefore no decorum or respect for a wife’s husband.  Really, Abraham?  You pimped out your wife because Abimelech didn’t fear God? Doesn’t sound like there was much fear of God in Abraham!  In fact, Abimelech was the one who feared God enough to make it right.  He admitted sin (v9) while Abraham made excuses.

Still God struck all Abimelech’s women barren for his “innocent” treachery until Abraham prayed for God’s mercy (vv17-18).  Seems like just the opposite would’ve been more just. Yet, God will have his man often despite that man!  He is carrying out a sovereign plan that goes through Abraham, Isaac and Jacob no matter how pathetic those men were. Thankfully, by Genesis 22 Abraham had learned his lesson.  He would not try to weasel out of any more impossible situations but would trust God to make good on his promise.

God will save his people even if that people have little interest in being saved God’s way. Hence, the scandal of the cross and God’s sovereign initiative to save his enemies and conquer them through love (Rom 5.8).  The Beloved Son is also the Faithful Husband.  Like Adam before him, Abraham sacrificed his wife’s honor to protect himself.  Not Jesus.  He sacrificed himself to protect his Bride’s eternal purity (Eph 5.25-27).  Abraham traded his bride for his life.  Jesus traded his life for his Bride.  Abraham would rather sleep alone for his own sake.  Jesus would rather die alone for the church’s sake.  If you want a shot at Jesus’ Bride then you’ll have to kill him first.  But you should know he doesn’t stay dead and he is a very jealous husband (2 Cor 11.2; Heb 11.31).  No wonder Abraham rejoiced to say Christ’s day (Jn 8.56).

But enough about rascally Abraham.

What would we do if not for God restraining our sin?  God could invade our dreams to say as he did to Abimelech, “I also kept you from sinning against me; therefore I did not let you touch her.”  God is to be praised for curtailing our free will, restraining us from doing what we freely want to do?

We should readily confess our sin and thank God for his forgiveness freely given in Christ to all who believe.  We must also thank him for keeping us from sinning against him for the sake of Jesus.  God forgives the sin we commit and also keeps us from committing sin.  Let us not assume that we avoided sin because we’re strong or spiritually-minded.  We sin because we want to and we would sin far more were it not for God’s restraining grace.  So listen to your dreams tonight: