“…if My people who are called by My name humble themselves and pray and seek My face and turn from their wicked ways, then I will hear from heaven, will forgive their sin and will heal their land” (2 Chron 7.14). 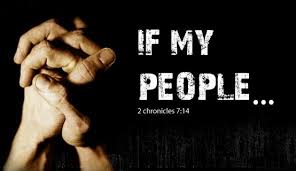 It is not uncommon to see 2 Chronicles 7.14 boldly displayed on billboards and church marquees. It is the clarion call to all citizens to pray for political, moral and spiritual change in America.  If the citizenry would gather prayerfully and repentantly at city hall or courthouse steps then God would heal our land of the free.

The winds of change are indeed reaching gale force in our nation.  Our slide into irreversible moral decay has passed the point of no return.  In reality, though, we crossed that point in Genesis 3.  There really is nothing new happening in America that has not happened repeatedly in redemptive history.  Americans are are children of Adam before they are children of the Revolution.  Geography is no cure for what ails the soul.

But is 2 Chronicles 7.14 the silver bullet to stave off wholesale American degeneracy? Or is it a gospel primer?  Is a portent for the revival of America’s “golden age” or a harbinger of the global lordship of Jesus Christ?

Consider the context.  Solomon has just built the world’s most magnificent temple wherein Yahweh’s glory “filled the house” (vv1-3).  God would make his presence visible and tangible in Solomon’s temple.  The grand opening was observed with great fanfare to say the least.  For a solid week Solomon grilled up 22,000 oxen and 120,000 sheep (v5).  The Memphis in May barbecue cooking contest has nothing on that aroma!

With the ribbon cut and front doors open for business, God visited Solomon at night (v12).  The Solomonic temple started with promise and grandeur.  God would consider it his “house of sacrifice” for Israel (v12).  And if Israel would remain faithful to always repent and seek God’s grace in forgiveness, then God would heal the damage of famine, bugs and disease (v13).  In other words, if Israel persevered in what the temple represented and provided then they would enjoy God’s open eyes and ears (v15).

“…if you turn away and forsake My statutes and My commandments which I have set before you, and go and serve other gods and worship them, then I will uproot you from My land which I have given you, and this house which I have consecrated for My name I will cast out of My sight and I will make it a proverb and a byword among all peoples.  As for this house, which was exalted, everyone who passes by it will be astonished and say, ‘Why has the LORD done thus to this land and to this house?’  And they will say, ‘Because they forsook the LORD, the God of their fathers who brought them from the land of Egypt, and they adopted other gods and worshiped them and served them; therefore He has brought all this adversity on them'” (7.19-22).

For all the pageantry and promises, Israel failed to keep 2 Chron 7.14 and God kept 7.19-22.  Babylon later rolled into town and redeveloped Jerusalem, starting with the temple (Jer 52.13).  After a couple of generations in exile, God mercifully opened the door for any interested Israelites to return to Jerusalem.  They would rebuild their city and beloved temple (see Ezra-Nehemiah).  Only the second temple did not have near the glory Solomon’s did (Hag 2.3).  But Israel made do.

The second temple was not opened with the same Solomonic pomp.  In fact, there were disappointing construction delays.  Then God told Malachi only when his messenger clears the way would God “suddenly come to his temple” (Mal 3.1).  So whatever presence God provided in the second temple it was nothing like what it would be when the way was cleared.

Four hundred years later God indeed came to his temple!  Only it was nothing like what Israel expected.  Seems a rather strange messenger (Mark 1.2-3) prepared the way for an even stranger “Temple” (Jn 2.13-22).  God himself came to Israel in Jesus Christ: The Glory-Filled (Jn 1.14) Meeting Place (Jn 4.21-26) for God’s people.  God didn’t come to evict all the Gentiles from Jerusalem.  He came to evict Satan from the hearts of his chosen people.  He didn’t come to restore a temple in Israel, but to raise his Temple within the hearts of all believers in Christ.

In another gesture of profound mercy, God promised salvation to all who would honor his True Temple.  If they rejected him then he would reject them.  After three years of public ministry, Israel refused to honor God’s House-in-Christ (Heb 3.6).  Therefore,

“Jerusalem, Jerusalem, who kills the prophets and stones those who are sent to her!  How often I wanted to gather your children together, the way a hen gathers her chicks under her wings, and you were unwilling.  Behold, your [not “My”] house is being left to you desolate!” (Mt 23.37-38)

In a display of literary genius, Matthew helps us consider the gravity of Jesus’ announcement.  On the heels of Matthew 23, Jesus left the temple complex and the disciples assumed themselves his tour guide.  They drew Jesus’ attention to the temple campus and its supposed magnificence (Mt 24.1; cf. Mk 13.1).  They sensed it was about to all come together.  Jesus was surely about to renovate God’s “house.”  They expected Jesus to say, “Yep, boys, just you wait. God is returning to the temple and you’ll have corner offices.”  Rather, Jesus said, “…not one stone here will be left upon another, which will not be torn down” (Mt 24.2).

Not only was Jesus not going to headquarter in the Jerusalem temple, he was going to raze it to the ground.  His throne is in the heavens, not in a measly obsolete building.  In the shadow of Temple 2.0, he announced 2 Chronicles 7.19-22 2.0.  There would not be a third version.

In AD 70, Jesus made good on his promise.  Rome did its worst and for some 2,000 years Jews have had barely a wall left of their “glorious” temple.  It is a desolate byword.  They would rather gather at a crumbled wall than gather to their Risen Messiah.  While they wait for Yahweh to come to his temple, the gospel declares he already has.  While they await reconstruction, God has already rebuilt the True Temple through resurrection (Rev 21.22).

2 Chronicles 7.14 is not about a National Day of Prayer for the healing of America.  It and its context is about Israel’s wholesale rejection of God, displayed in their corruption of the temple.  It anticipates their rejection of his ultimate salvation in Christ (Jn 1.11).  Because Israel rejected Jesus and his “house” God left their house desolate.

2 Chronicles 7.14 is not something we hope becomes a reality because it already is!  Jesus became True Israel who sought the LORD in his holy temple.  As those united to Christ by faith, we rejoice that 2 Chronicles 7.14 is now true of the Church.  God now has a people who do pray, seek and return to him in that they follow Christ (Mt 21.43).  They honor God’s True Temple and trust his sacrifice, praise his salvation and proclaim his greatness to the nations.  They do not gather to an ideal or civic utopia.  They gather to a Person whose name is none other than Jesus.

By all means, let’s gather in as many contexts as possible to pray (1 Tim 2.1-2).  But let’s do so under the banner of the fulfillment of 2 Chronicles 7.14: Christ’s banner. This verse isn’t a silver bullet to save any particular nation.  It does provide hope that God rescues those among the nations, however.  Let us wave the flag of his salvation so that more and more forsake this broken land for Zion’s “healthful shore.”