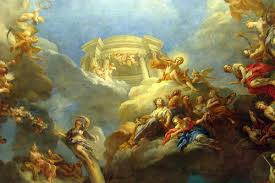 What exactly is the “kingdom of God”?  It was the substance of Jesus’ earthly ministry (Lk 4.43).  It was a staple of Messianic expectations.  What Jesus taught about God’s kingdom, however, was much different than what most thought to be true of that kingdom.

When we think of “kingdom” we think king with a capitol, army, law, borders, flags, subjects and authority.  When Jesus preached about God’s kingdom, he did not fit those categories neatly within anyone’s expectations.  His kingdom “is not of this world” (Jn 18.36).  Jesus explained to Pilate if his kingdom was the run-of-the-mill earthly kingdom then his subjects would be doing what good loyalists do: fighting for the crown.  But since his kingdom was “not of this realm” then he and they did not play by the same rules.  Therefore, Jesus willingly stood bare-necked before Pilate while his loyalists hid in the shadows.

Jesus’ idea of “kingdom” was so preposterous that Pilate placarded “The King of the Jews” on the cross (Jn 19.19).  Rome mocked Israel and their so-called king.  Like the star quarterback with his jock fraternity, Caesar wins.  They always win.

Perhaps one of the most important ways Jesus defined God’s kingdom was on the so-called Mount of Transfiguration (Mt. 17.1-8; Mk 9.2-8; Lk 9.28-36).  In every instance, the Gospel writers prefaced their Transfiguration narrative with Jesus’ promise that some in earshot would not die before seeing God’s kingdom (Mt 16.28; Mk 9.1; Lk 9.27).  Though scholars debate what Jesus actually meant, it seems rather clear that the Transfiguration was the revelation of God’s kingdom to Peter, John and James. And they to us (2 Pt 1.17-18).

What happened on the Mount of Transfiguration was literally an event of biblical proportions.  God wrapped up Sinai, the Exodus, the tent of meeting, Torah, the prophets, his glorious cloud-like presence (i.e. all that made Israel Yahweh’s kingdom) in one package: My Son, the Chosen One (Lk 9.35).  The Kingdom of God is the unrivaled glory and authority of Jesus Christ over all things.

Jesus was in prayer on the mountain when his face “became different” and his clothes started shining (v29).  We can have no idea what it mean for Christ’s face to “become different” but it was remarkable sight.  In fact, no one had seen anything like it since Moses (Exod 34.29, 30, 35).

Who better to show up than Moses himself (v30)?  And he brought along Elijah to make sure Peter, James and John saw the Law and Prophets deferring to Jesus.  Moses, Elijah and Jesus were chatting about Jesus’ “departure” (literally, his exodon).  The New Moses was about to lead a New Exodus.

Peter and the boys finally woke up (v32).  Seems Peter was always sleeping when he should’ve been awake (Mk 14.37) and awake when he should’ve been sleeping!  They were seeing God’s glory descend.  What would a good Jew suggest but to set up three tabernacles for these Hall-of-Famers?  That’s where they had seen God and heard from his mediator.  Talk of God’s glory and Exodus could only suggest brand new tents for the occasion.  Luke mercifully explains Peter was “not realizing what he was saying” (v33).

As their knees knocked in the cloud they heard the thunder (Exod 19.16).  Only this thunder was audible.  It was the voice of God announcing the unrivaled authority of the Son.  The last time God clouded a mountain in thunder he etched his law on tablets.  This time he announces only one law: listen to Him (v35)!

What is God’s kingdom?  His kingdom is a Who.  His kingdom is ruled by Jesus whose “dominion will be from sea to sea, and from the River to the ends of the earth” (Zec 9.10).  His banner over us is love (Song 2.4).  His reign is on display through the church (the Christian Nation), those who have received the divine law to listen to Jesus.  Like Peter we are wide awake to see him.  Listen to him!