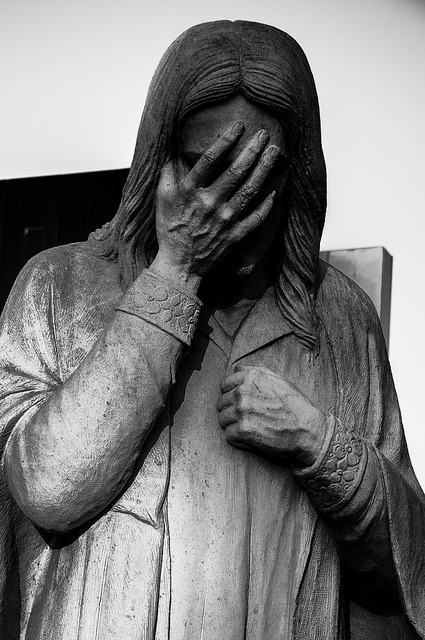 Dad has recently settled into an assisted living facility.  None of us is particularly glad about it but we’re seeing some benefits.  In three years he’s gone from 2,500 square feet to 700 to 120.  It’s metaphorical, really.  As we get older our world gets smaller and more temporary, more lonely.  Dad has yet to call it “home” and I’m not sure he should.  At best he calls it where he “stays” or his “place.”  And that’s what it is: a place, not home.

He’s stronger some days than others but still inches toward the midnight hour.  John 11 always escorts me out when leaving Dad napping in his chair.  And I take tearful comfort Jesus has been there, too.

The apostle John put Jesus on peculiar display in John 11.  It’s only one of two occasions the Gospels mention Jesus crying (cf. Lk 19.41).  The fullness of God and the fullness of man swirling heavenward to stir up faith in the Bethany township. The Son of God who raises the dead is also the Son of Man who weeps in graveyards.

The Son of Man went to a funeral as good friends do (vv15, 17).  The Son of God would end the funeral as a good God does.

The Son of Man consoled a grieving and theologically astute sister (vv23-27).  As the Son of God Jesus eased her pain, not by platitude or cliché, but by drawing her to himself.

The Son of Man was “deeply moved in spirit and was troubled” because his friends suffered (v33).  The Son of God Jesus could actually do something about it:  “Where have you laid him?” (v34).

And somehow the man “bound hand and foot with wrappings, and his face . . . wrapped around with a cloth . . . came forth” (v44).  Maybe he shuffled.  Maybe he floated.  Maybe he just appeared.  But when Jesus spoke a living soul returned to a reeking corpse, oxygen filled Lazarus’ lungs, decomposition reversed course, strength returned to his legs.  As if speaking to death itself Jesus commanded, “Unbind him, and let him go” (v44).

As John’s famous seventh sign, the raising of Lazarus echoed the seventh day of creation: God’s salvific rest.  John’s Gospel would slow down to the last week of Jesus’ mortal life as chapter 12 begins “six days before the Passover.”  It would be The Passover to end all Passovers.  John covered eternity past to AD 33 in eleven chapters.  He spent the next ten chapters to cover a few days.  Raising Lazarus was the literary equivalent of an emergency brake on a locomotive.  With Lazarus’s resurrection the preface to John’s Gospel was finally complete and he could get on with the story.

The Beloved Son would die, be sealed in a tomb behind a stone, and his friends would mourn.  But God would remove the stone (Jn 20.1) and the Beloved One would come forth.  Only he would leave his burial clothes in the tomb (v5).  Unlike Lazarus, Jesus would never need them again.

Jesus entered into the fullness of human suffering (Heb 2.14; 4.15).  As the Son of Man Jesus would take on and endure the curse we welcomed into his world. Therefore, the Creator and Goal of all things (Col 1.16) – who created a good and perfect world, who is Life and Light (Jn 1.1-5) – chose to stand before the lifeless, lightless cave of a beloved friend.  Knowing he would ransack death, Jesus stood in the middle of wailing mourners before a stonewalled tomb and cried as if to say, “This is what my world has come to!  Look how far we’ve fallen!”

But there he was.  Engulfed in the tidal wave of human depravity. Satan’s playground.  The one who created the Tree of Life tasted the bitter fruit of death. And he wept.

It is a John 11 moment when we visit Dad at his “place.”   We know Jesus has been raised and will raise us on the last day (Rom 8.11).  But until then we stand with and before broken people crying “This ought not be!”  Look at what this world, the world we wanted, has come to.  It’s broken.  Really broken.  There are folks far worse off than Dad but there is a we-ness about things at the place.

In the meantime, we live as exiles during the proverbial “two days” in which Jesus stays where he is (v6) until he returns with his word of Life (Jn 5.28-29; 14.2-3).  We live by tear-stained faith in the Risen-and-Returning One.  Until then we mourn, cry, pray and hope behind the stone.  But there is a small shaft of Light around the edges.  While we mourn here Jesus prays for us There, keeping us believing (Jn 11.42; Heb 7.25).