“but they desire to have you circumcised so that they may boast in your flesh” (Gal 6.13). 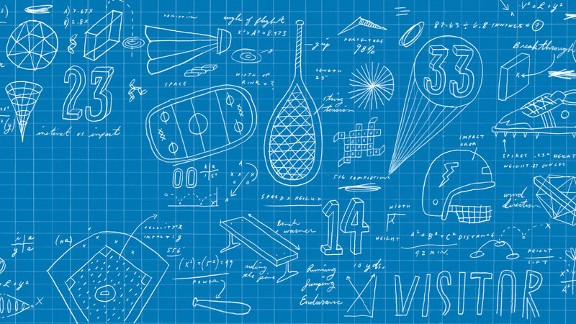 Baseball has its BABIP (batting average on balls in play).  Basketball has its PER (player efficiency rating).  Football has its AYPA (adjusted yards per attempt).

“Analytics” has taken professional sports by storm.  Calculus before coaching.  Algorithms over experience.  Xs-and-Os on a clipboard only arrange 3-D mathematics.  Losses once explained by how a fickle ball bounces are really the result of complex and predictable equations.  Successful coaches must play the averages, not the man.  Don’t take any chances.  Do the math.  Or else.

Players once valued for their leadership, guts, character and instinct (i.e. the “intangibles”) are now merely the sum of their stats. We mathematize a player’s every move and dehumanize the player himself!  Life-like video games and video replay are removing the need for real men to play and referee the real sport.  We need only the collision of statistics to know the thrill of victory.  We aren’t competitors, but producers.

Of what relevance could hockey’s Pythagorean Won-Loss Formula have on the church?

The church also suffers from its own dehumanizing advanced analytics.  We evaluate churches based on their BBB (buildings, budgets and baptisms). How many square feet do you have or did you build last year?  How much is your budget?  How many did you baptize?  Increase equals faithfulness. Decrease or stagnancy equals decline.

If trending downward, we expect the pastors do less exegesis and more analysis to ensure we produce more.  Pastors feel compelled to pad their résumés with attractive statistics. Rarely can pastors appeal as Paul did when the Corinthians demanded his stats: “you are our letter” (2 Cor 3.1-3). Instead, they must show a track record of increasing attendance, giving and building to keep or find a job.

The Gospels show us the nature of Christ’s kingdom.  His kingdom is “not of this world” (Jn 18.36) and therefore not measured by the finest MIT has to offer.  Crowds and worldly acclaim didn’t impress the Gospel writers.  They were impressed by occasions when Jesus confronted, healed, changed, loved persons.  A Samaritan woman.  A man born blind.  A father pleading for his sick son.  A short, greedy tax collector.  In fact, the “crowds” don’t typically fare well in the Gospels.  Small, overlooked people with names and faces do.

Paul confronted Galatian Judaizers who seduced Gentile converts into a Torah-dependent life.  Paul rebuked them scathingly saying, despite their pious rhetoric, they only wanted notches on their Mosaic belts (Gal 6.13).  They demanded circumcision so they could boast in the flesh and be on to the next promising market.  They didn’t love people; they used them.

Would Paul say the same to us about our baptisms?  Do our stats tempt us to vain-glory?  Do we care more about how many we baptize than who we’re actually baptizing?  Do we boast in baptizing 500 last year but ignore the 200 professing Christians who stopped coming altogether, or a widow’s steady faithfulness a year after the funeral?  Using Jesus’s otherworldly metrics, does it really matter how many we baptize if we pay little attention to their perseverance in Christian faith?

Did we boast in our acreage or square footage last year?  Do we pride ourselves on having land/buildings we’ve never really needed and will probably never really use? A better indication of your church’s health could be how much land it sold or gave away.  Did your church do with less so that others in the kingdom could have more?  Perhaps not building for the glory of God is better than building for it.

Such is infinitely more true of Christ’s kingdom.  His church plays by different rules and rejoices in what cannot be measured.  When you have a crucified Savior, formulas never measure faithfulness.  We rejoice in the fruit of the Spirit (Gal 5.22) rather than the numerical outcome of strategies. We rejoice in particular names and faces more than numbers and trends. We don’t care as much about counting noses as looking into eyes. Not how many in the seats but who has Jesus saved.

When you gather with your church Sunday don’t count the crowd and boast in (or bemoan) the math.  Look in the eyes of those sitting next to you and give them Christ’s peace.  Jesus calls us by name, not by our number (Jn 10.3).  We couldn’t ask for a better Coach.