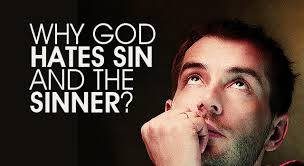 If you’ve been in church for any length of time you’ve been admonished to “love the sinner, hate the sin.”  That is a helpful corrective to those of us who sin ourselves.  Every single person is an image-bearer of God and worthy of the dignity afforded the highest of God’s created beings (Gen 1.26f.).  To arrogate oneself as the arbiter of human life deserves the sternest of punishment (Gen 9.6).  We don’t create life and, as a rule, it not ours to end.

Even as fallen creatures, we retain the highest honor among all the created order.  We’re not brutes, beasts or bovines.  God’s own personhood spills over to us and in us.  People are indeed to be loved more than all other creation because they are people (i.e. divinely and uniquely ordered in all creation).  God loves sinners and since we bear God’s image then so should we.

But is “love the sinner, hate the sin” too simplistic?  Does it somehow separate sin from the sinner that it fails to capture all of God’s justice and mercy in salvation?  After the fall, can we rightly say sin is a tumor on an otherwise righteous life?  Are we inherently righteous and good, and sin is a callous needing cauterizing?   Is sin simply something we do or is it something we are?

We get a sense of this in our own parenting.  While we are grieved at our child’s greed or anger (hereditary, by the way), we nevertheless still love them.  And if we’re faithful, loving parents we will punish, correct and restore our sinful child.  If our child snatches a toy from their friend we don’t punish greed.  We punish them for being greedy. We don’t punish the category of sin because we can’t punish ideas. We punish our child.  They physically bear the blame and pain for the sin they commit.  In a sense, they personally become the objects of our hatred of sin.

We should first confess we stare into a bottomless mystery.  As fallen creatures, we do not and cannot rightly manage the interplay between love and hate.  We innately suspend one to express the other.  It’s impossible for fallen creatures to be entirely loving and entirely angry at the same time toward the same people.  Only a perfectly Holy God, who is not tempted by impulse or given to rage, can pull this off.  He neither loves nor hates the way we do so we are left off balance by some things that God balances perfectly.  In fact, we should probably be careful of defining God’s love or hate by our own experiences or feelings.

In no way whatsoever am I trying to make God a capricious hater of anyone.  God is not a hatemonger even if some who claim to be his children are.  But we do have to consider some important biblical texts and themes that magnify what God did at the cross out of love.  As parents, our consistency and severity in discipline is a means by which we want our children to understand the gravity of our love.  Likewise, by understanding the nature of God’s hatred for sin and sinners, we are drawn into the grandeur of his inestimable love.  I offer the following nine biblical propositions to consider (because ten would be too perfect).  They are in no particular order but do overlap.

1.  God loves and hates sinners (Pss 5.5; 11.5; Hos 9.15; Mal 1.3; Rom 9.13).  As the most holy being in the universe, God must necessarily be the most offended being in the universe by sin; especially as that sin is committed by those he created.  As our Holy Creator, God alone has the right to be the most offended by the unholiness of his creatures.  In other words, while we may be offended in life we have never been offended like we’ve offended him.  Therefore, that our most-offended God would then save those who offend him the most demonstrates him to be the most loving being in the universe, too.  By definition, God has the farthest chasm to cross.  That God would lovingly save those he must otherwise hate only serves to exalt the Godness of his love.

2.  God created us as wholistic beings: body/soul, material/immaterial, physical/spiritual, visible/invisible.  Therefore, who are are and what we do are inseparable components of what it means to be human.  It’s what it means to be God’s image-bearers since what God does and he says are part of who he is.  We simply cannot separate sin from the sinner as if they exist exclusive from one another.  Our hands, feet, eyes, ears and mouths commit sin because our hearts and minds instruct them to.  God is holy and righteous and created us not only to do the right things, but to be the right people.

3.  Sin is not an ethereal category imposed on us from time to time.  Sin doesn’t float around on its own and sometimes light on us.  It is part of who we are as fallen creatures.  In Adam, we chose to be sinners rather than righteous.  Jesus said sin is what sinners do (Mt 15.19-20).  Murder and adultery do not sneak up on a man, they come out from him.  We do not “catch” slander and gossip like a head cold; slanderers slander and gossipers gossip (Mt 12.34).  In a word, sinners sin.  Sin is not simply what we do; it’s what we are.  We sin because we want to and it’s our fault (Jas 1.14).  And if God is to hate sin he must simultaneously hate sinners.  Again, he is simultaneously able to love them, which is something deeply mysterious for us.

4.  The sacrificial system anticipated God’s hatred of sin and sinners.  A real live warm-blooded animal had to die for atonement.  The High Priest did not atone for the category of sin.  If so, he would need only acknowledge a confession and wave his hand.  No, a living being had to die in the place of, not an act of sin, but the sinner.  God’s anger toward sin had to be displaced from the sinner onto the animal.

5.  Fulfilling the sacrificial system, the cross demonstrates God’s hatred for sin and sinners.  If God wanted to judge the category of sin he would’ve held a philosophical society meeting.  If all God needed to do was judge sin qua sin he would’ve spared all the bloodshed and written a decree.  But God poured out his wrath on a Person because persons sin and deserve God’s eternal judgment.  God took out his wrath on a Man, The Son of Man, the “man Christ Jesus” (1 Tim 2.5).  For us to rightly glory in God’s love for sinners, we must first consider his hatred, not just of their sin, but of sinners themselves.

6.  Substitutionary atonement demands God’s hatred of sin and sinners.  God made our sinless Jesus “to be sin on our behalf, so that we might become the righteousness of God in Him” (2 Cor 5.21).  That is, Jesus became who we are (not merely what we do) so that we might become who he is, not merely do what he does.  Jesus did not come to condemn sin by legislation.  God condemned and atoned for sin by treating Jesus as sin and sinner.  Jesus died in the place of sinners, not sin.  If God had no hatred of sinners he certainly had no cause to forsake his mercilessly beaten Son.

7.  Regeneration (new birth) assumes God’s hatred of sin and sinners.  Jesus reserves his kingdom only for those who are born again (Jn 3.1-15).  Salvation is not a reward for stopping wrong things and doing right things.  God’s salvation demands we become new people.  God must change us from people he hates into people he can rightly love.  Of course, this change is effected by his love in the first place.  In some sense, God’s hatred serves the purposes of his love.  God is love after all (1 Jn 4.8, 16).

8.  The nature of the resurrection and heaven demand God’s hatred of sin and sinners.  If all God needed to do was condemn sin as a category renew righteousness then Jesus need not be raised bodily.  God doesn’t resurrect the category of righteousness.  He could do that without all the bloodshed and Easter.  But he raises people to be righteous.  We tend to have an anemic perspective on death and afterlife.  We might think God finally gets rid of this worthless corpse that commits all the sin.  At death we shed this carcass and our good spirits can finally live free.  One, such gnostic heresy was one of the first enemies the church picked off.  Two, it cheapens redemption.  All of us and every part of us is corrupt.  And God redeems every part of us. We groan because something is not quite right until our sanctified souls are reunited with a sinless body (Rom 8.22-23; Rev 6.9-11).  God doesn’t merely love righteousness but the righteous themselves.  And by his grace God loves all believers in Christ as he loves Christ himself, the Righteous One (1 Jn 17.23).

9.  The nature of hell demands God’s hatred of sin and sinners.  Hell will be a real place populated by real people.  Just as those in Christ will be raised bodily to enjoy heaven without ever dying again, God will also raise the wicked to suffer eternal punishment without ever dying again (Jn 5.29).  I spend thirty minutes in the sun and my body suffers.  There is no way this body could endure a fiery hell.  As it is, everyone will succumb to an attack on our bodies.  Our bodies are not equipped to stave off death.  Something will get us all.  But God will one day raise the bodies of unbelievers such that they will endure eternal punishment without ever dying (Mk 9.43-44).  They will beg to die again and be annihilated, but God will not relent.  If God only hated sin then there would be no need for an eternal hell.  He will not eternally judge sin as a category, or even only Satan; he will judge sinners themselves.

Friend, underneath all the bad things you do you are not inherently good.  It’s not that God will sweep away all the bad to get to the good person you really are.  We are not like rotted sills where a carpenter can simply extract the rot until he gets to good wood.  Like me, you are inherently bad (Rom 3.9-18).  We are sinners through and through.  And God hates that.  He must.  God hasn’t directed his wrath merely at what we do, but at who we are.  We are in his sights.

When you die you won’t simply drift off into a cosmic neverland.  God values his character and his creatures far too much for that.  You will spend eternity as a soul with hands, feet, eyes and ears because that’s what it means to be human.

But the God who created you, though rightly hating sin and sinners like you and me, chose to assume to himself all that makes us offensive to him (Is 53.4-6).  In Christ, God chose to become the object of his own hatred so that believers in Christ would become the object of his love.  At the cross God’s wrath served the purposes of his love.  Whatever an eternal hell is to a sinner Jesus endured for an afternoon on a Palestinian hilltop for sinners who want to be different people for eternity.  If God’s hatred of sinners rattles you then his love for sinners will rock you!  This is a remarkable gift to the world and one you would be foolish to reject.  Come to Christ, who suffered the fate of sinners, so that sinners inherit the riches of his righteousness.  He’s loves the whole sinner wholly.