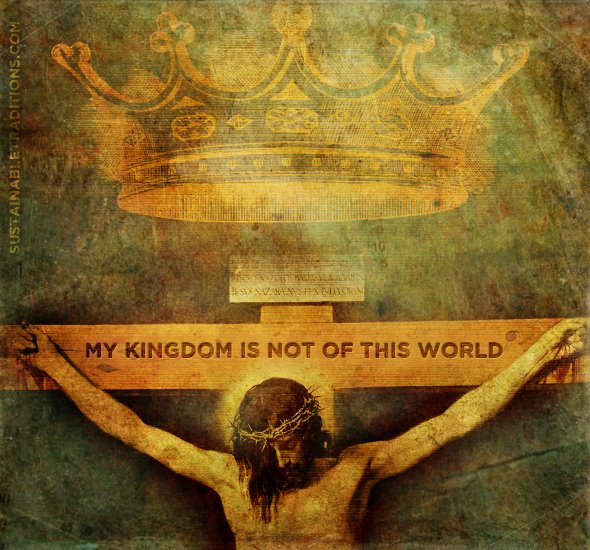 In a chapter about how Christians respond in marriage, singleness and widowhood Paul tucked what could be the key to the Christian life and ethic:  This world as we know it (the outward form or schema) is passing away.  In fact, “the time has been shortened” (v29).

And with it all that takes up most of our lives: marriage, pain, joy, stuff.  Christians therefore hold all those relationships and experiences loosely in light of the world to come. Paul’s intended “to promote what is appropriate and to secure undistracted devotion to the Lord” (v35).

Undistracted devotion (εὐπάρεδρον ἀπερισπάστως).  Paul did not use those words anywhere else in the NT.  The very words he used were devoted exclusively, without distraction, to his intention!  Semantics, ranges of meaning, nuance, and jargon would not get in the way of what he meant.

Paul did not, however, command gnostic indifference to the “stuff” of life.  He urged perspective.

He did not mean married men are free to live like single men.  Rather, their marriage is not ultimate (Mt 22.30) and can end in a split-second on the interstate.  Or it can end 60 years later when the chemo runs out.  Either way, it will end.  So hold your marriage loosely with one hand while holding Jesus tightly with the other.  Love Jesus more than you love your spouse.  Your spouse will love you for it.

Paul did not mean Christians are Stoics who don’t weep or rejoice.  Rather, our worldly pains and joys are not ultimate.  Christian weeping is temporary (Ps 30.5) so we hold our most difficult pain loosely.  Worldly joy is temporary (Lk 10.20) so we don’t assume we have arrived when we’ve succeeded.  Our pain does not condemn us.  Our joys do not save us.  One tragedy does not make our life eternally tragic.  One success does not make our life eternally successful.  Our worldly pain should not overly burden us.  Our worldly successes should not overly comfort us. Jesus is greater than both.

Paul did not mean Christians should not buy goods or can treat their stuff haphazardly. Rather, we hold what we buy very loosely.  Our possessions neither define nor save us.  They don’t ultimately provide anything eternal for us. Christians hold what they buy loosely, dressed in readiness with lit lamps (Lk 12.35; cf. Lk 12.15-34).  We travel light.  Nothing we own is ultimately worth living for.  We don’t set our hearts on this world so we’re always ready for the next one.  We want Jesus to come this afternoon more than the UPS truck.  Amazon be damned!

All we hold dear in this world–spouse, pain, success, possessions–will be gone much sooner than later.  Like Daniel and friends we live in Babylon without becoming Babylonian. We are not “of the world” because Jesus was not (Jn 17.16).  We are ambassadors to the world.  We use the world (because we must) but assume very little of it.  We assume everything of Jesus.  We use the world as marathoners use a cup of water.  It gets us by until the next cup, and the next, until the race is over.

Overlay this principle on the church’s current pressures and temptations.

Be heterosexual as though you weren’t.  Love Jesus more than you love heterosexuality.  We’re not to be indifferent toward homosexuality by any means, or think it harmless to faithful Christianity. Rather, we know heterosexuality doesn’t save anyone.  It’s not the end all-be all of Christian morality.  Jesus is.  We love lifting up Christ’s name and honor rather than shouting down our opponents.

Like Paul in “postmodern” Athens, we hold up the precious value, loveliness, power of Christ so that more sinners like us are compelled to him (Acts 17.22-34).  We make disciples, not heterosexuals.  We don’t call gay and lesbian friends to be straight so they can be saved.  We call them to be saved so they can be free.  Better to have pews full of homosexuals crawling away from their sin toward Jesus than heterosexuals with no regard for him.

View Supreme Court decisions as though there are no judges.  The church has not ultimately failed.  Christians need not blame all the other “liberal” Christians for prayerless schools, abortion, and same-sex marriages.  This world has been passing away since Genesis 3 and any assumed decency with it.  We don’t load a Supreme Court’s decision with eternal value.  Even if the court rules in our favor it would still only be a temporary ruling (we would rejoice as though we didn’t rejoice).

Only Jesus is Supreme.  Only he is Judge (Jn 5.22).  The Supreme Court has not hindered Christ’s kingdom in the slightest any more than it could strengthened it.  Let’s not assume too much of nine judges not matter how stately their robes.

Appreciate democracy as though you don’t live in one.  Our beloved American democracy–a mere  240 years old–is being whittled away at breakneck speed. The world we know passes away.  The church mustn’t then tighten its grip on any political system.  We loosen it.  Democracy might promote best the common weal but it’s not necessary for the church to thrive.  In fact, church history has proven the opposite true more than not.

So we don’t double down on the Republic. We bet everything on Jesus.  For 2,000 years the church has always lived in tension with the world.  Our citizenship is in heaven (Phil 3.20-21) and we never quite fit in anyone’s constituency or conform to the pollster’s demographic. Jesus will fix what’s wrong through resurrection, not legislation.  Now is not the time for more entrenched patriotism that blurs kingdom lines. Now is the time for “undistracted devotion to the Lord” (1 Cor 7.35).

While current events may appear to cripple the church’s work and witness, they are in fact catalysts for it (1 Pt 2.9-10).  We once availed ourselves of a common decency and civility.  We now know how quickly that fades.  A vapor really.  We can finally stop assuming sexual restraint, an “unbiased” judiciary, and civil democracy are friends of the church.  They’re not.  And we should not expect to befriend them again.

We can now unashamedly proclaim the otherworldly excellencies of Christ without trying to fit that message in worldly categories or secular reason.  We can now leave the fleeting baggage behind so as to travel light.  We can now recover our peculiarity and embrace the blessing of being insulted, lampooned and ridiculed (Mt 5.11-12). There is no need for us to doll ourselves up for the world any longer (as if there was ever any reason to do so).  We have no need to accommodate the gospel in order to be reasonable or palatable.  Or American.  Church membership need not be cheap and easy any longer.