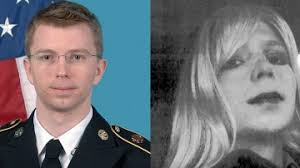 PFC Bradley Manning was convicted as a national traitor for leaking classified military information.  He faces 35 years in prison.  Or does “he”?

It seems Private Manning has now declared himself to be Chelsea Manning, his long-time inner and true identity.  This week he released this statement:

As I transition into this next phase of my life, I want everyone to know the real me.  I am Chelsea Manning.  I am a female.  Given the way that I feel, and have felt since childhood, I want to begin hormone therapy as soon as possible.

Per the statement, Manning’s declaration was effective immediately and insisted the feminine pronoun be used from that point forward.  With all due respect, I will retain the masculine pronoun for now.

First things first.  Whoever PFC Manning thinks himself to be, he remains a human being.  Therefore, he is to be afforded the respect and dignity due of any person.  He is not a dog or mutant so we shouldn’t rant against him like one.  He doesn’t need to be strung up or even isolated.  He doesn’t need to snap out of it or have a one-night stand.  He needs the truthful compassion of the gospel.  Who he feels like he is is nothing compared to who God already made him to be.  He hopes “Chelsea” will fill, supply or correct something badly damaged in Bradley.  That’s what fallen people do.  We seek salvation from something we know is terribly wrong (Is 55.2).

Further, let’s not assume the onslaught of “transgender” issues are anything new.  They are expressions of the perversion we all inherited from Adam in Genesis 3.  We may not all come out as liberated “transgendered” folks, but we do all come out wrank sinners all the same.  A man who abuses women is no less offensive than a man wanting to become one.  On one hand, Manning should be pitied.  On the other, he should be warned.  The same is true for us all.

There was explicit instruction against cross-dressing in the Torah (Dt 22.5).  There is warning to the “effeminate” in the New Testament (1 Cor 6.9).  Therefore, this is not a 21st-century novelty that offends the “good ol’ days.”  While technology has provided instant, global access to these stories, we really shouldn’t be surprised there are stories.  The news hasn’t discovered something new.  It is able now to uncover what has always been.  Calling good evil and evil good (Is 5.20) is what we do outside of Eden.

That said, PFC Manning has provided another theater in which to discuss what it means to be “real” human.  Is it simply a matter of becoming the person who makes you feel more, well, person?  Can we become someone new by personal fiat?  If we can demand everyone treat us as any person we want then why stop at gender?  Why not introduce a transracial identity as well?  Why not a transvertical or transannual identity?  If something as obvious as anatomical identifiers can be dismissed and ignored, then why not skin color or height or age?  This can be an exciting way to open a whole new world for guys like me.

Therefore, I want everyone to know the real me: I am Jamaal Sigvaldi Falco.  I am Jamaal because I’ve always felt like I wanted to be a tall, black man (think Denzel Washington).  I am Sigvaldi because who wouldn’t want to be a Norse warrior?  I am Falco because Italians are cool and “falcon” speaks for itself.

From now on airlines must give me the roomiest seat because the “real me” is 6’4″.  The government must now afford me minority status.  I will demand my share of any reparations due Viking families.  And, while in Rome I will assume all rights and privileges due Italians, especially the coffee and wine.  Lastly, I am Jamaal Sigvaldi Falco who is now perpetually 35-years-old.  What you call a slippery slope is the pathway to personal liberation, the unfettered self.

Any reader would consider this satirical and ridiculous.  But should it be?  PFC Manning and the California legislature insist we take this far more seriously; and the groundswell will only swell.  Again, without a robust biblical worldview, why stop at gender?  Why not ethnicity, height or age?  The same reasons Bradley Manning can declare himself a female are the same reasons I can declare myself 35-year-old Jamaal: a black Viking romantic.  Who or what is to stop me?  Why would you want to?

Since the Fall, every human has rebelled against God’s created order.  Even the created order itself does so (Rom 8.22).  We are born shaking our fist at God, charging him with treason against a sovereign us as though he got it wrong.  We think liberation is finally breaking off the shackles of our true self to become who we’ve always wanted to be.  We give little consideration to the notion our “wanter” may be corrupt.

Both Manning and we are guilty of a far greater treason.  We are not alter egos trapped in gender-confined bodies.  We are fallen creatures enslaved in sin.  We are not transgendered, but transgressors.  Salvation is not becoming who’ve we always wanted to be.  It’s becoming truly human: God’s Christ-besotted image bearer.

PFC Manning is not liberating his true self.  He is simply redecorating his prison cell.  We all do.  Some may think Manning has simply gone too far.  The gospel suggests he has not gone far enough.  Gender, height, age, ethnicity (heritage, education, poverty etc. etc. etc.)  are not our problems.  Sin is.  We don’t need a new gender.  We need a new heart.  And God has declared by divine fiat that all those in Christ are restored to their true selves.  That’s good news fit to print.