“For I know the plans that I have for you,” declares the LORD, “plans for welfare and not calamity to give you a future and a hope” (Jeremiah 29.11). 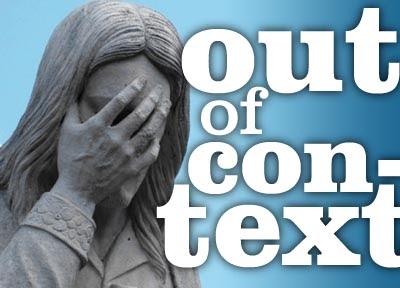 There are many verses and texts we’ve become so familiar with that they’ve lost their original meaning and intent.  Psalm 42.1, 46.10, and Philippians 4.13 come to mind.  We see them elegantly displayed on framed pictures overpriced in the local Christian “book”store.  They’re on coffee mugs and leather journals, plaques and posters.  After so long we’ve stopped considering if the verse actually means what is being implied by the artwork or friendly advice.

We love truth in sound bites, tweets and texts.  Who cares what it means as long as it makes us feel good and matches the decor?  We modern, enlightened, everything-is-microwavable people treat Scripture as a collection of one-liners rather than a body of redemptive truth.  In so doing, we pull out a few verses that serve our personal best interests and ignore the context (historical and textual) in which they were written.

But Jeremiah 29.11 is about far more, infinitely more, than what God has planned for my small life in this small world for the nanosecond we call “this age.”  Jeremiah 29.11 is about God’s master plan to take an otherwise sinful, exiled people and make them princes, sons and heirs of Christ’s new covenant Kingdom.  The “plans” God has in Jeremiah 29.11 are not about my personal success in this life.  They’re about Christ’s personal success to give us something beyond this life worth calling a real “future.”  Peter would call the hope promised in Jeremiah our “living hope through the resurrection of Jesus Christ from the dead” (1 Pt 1.3).

Jeremiah wrote to “the rest of the elders of the exile, the priests, the prophets and all the people whom Nebuchadnezzar had taken into exile from Jerusalem to Babylon” (Jer 29.1; cf. v4).  Because of Israel’s unrepentant idolatry and wickedness, God sent Nebuchadnezzar and his Babylonian thugs to conquer Jerusalem and carry the important people into exile (see Daniel).  Israel was not in Babylon because of an unlucky break or unfortunate political move.  They were in exile because they were rebels against God and rebels against God always lost the place God gave them (see Adam, Abraham, Noah, Babel, etc.).  Basically, in losing our privilege in Eden by not kicking Satan out of God’s place we estranged the whole earth from God.  And we’ve been losing our home in God’s presence ever since.  Since we rebelled in the Garden, every place any person has ever lived has been Babylon.  It is the world estranged from God because of sin.

Israel was not, however, to give any attention to the false prophets, palm readers and dream weavers among them (vv8-9).  God had been clear and there was no need to entertain anything more than what he’s already said.  Despite any preacher’s promise of a quick fix, the exile would last seventy years (v10).  Anyone suggesting or promising an easy way out was a charlatan.  God’s word was sufficient to sustain them while in exile.

Then we come to v11.  Our God is the Merciful, Longsuffering, Forgiving, Saving God of the universe.  And for his covenant people, Babylon would not have the last word.  Their exile was for their repentance (vv12-13).  God would see to it his people return to him  And he promises to be found by them and give them a home in his presence.

God will also judge all those who distorted his promise of salvation (vv15-19).  God would curse those who preyed on the people by selling fear and doubt (vv21-32).  Anyone who refused to listen and believe God’s word would be severely punished.

In Jeremiah 29.11, God promises far more than could fit in a thousand lifetimes.  Jeremiah looked forward to the gospel of Jesus Christ.  What does God promise a people exiled for their sin and helpless to save themselves from a wicked tyrant?  He promises that he will not always leave them in their well-deserved exile.  The life they make while in exile is not the life they will always live.  Rather God will give them a home of their own.  A home with him.  Their salvation rested on the sheer pity of God to redeem them.

Jesus promised in John 14.2-3 that he was going to prepare a place for his followers in the Father’s house.

By the way, this is another distorted verse.  Jesus doesn’t prepare each follower his own mansion.  The word for “dwelling places” is more like rooms in a huge apartment building.  Besides, Jesus isn’t referring to living quarters at all but to the expansive grace of God to save trillions of people.  But I digress.

He was telling his disciples what Jeremiah told the sinner-exiles: this world is not your home, but you must live in it for a while (see John 17.13-16).  But the day is coming when Jesus will return to bring the exiles home.  We live now with this “living hope” that what God promised he will fulfill.  And we must not entertain anyone suggesting otherwise.

In the meantime, in this place between promise and fulfillment, we make a life without it becoming our life (1 Cor 7.29-31).  We plant roots.  We raise lots of kids.  We take jobs and make widgets.  We use the world without becoming worldly.  We pray God blesses this foreign place with peace so that we may live quiet lives (1 Tim 2.1-2).

Yes, we are exiles in Babylon because we deserve to be.  But God has plans.  Those plans were put on display in Christ and guaranteed by the cross and resurrection.  God’s plans are not not for persons per se, but for a people.  And those in Christ are part of the new covenant people sustained by the living hope of their Living Savior.  We may be aliens, strangers and sojourners in this place, but we are sons and heirs in God’s place.  Just you wait (Col 3.4).

No, God’s plans are not about my personal health or wealth.  Neither poverty nor sickness keep anyone out of heaven.  Those plans are not even about this life at all.  They are plans to bring “all the ransomed church of God” home to “be saved to sin no more.”  Now, that’s a truth worth framing.