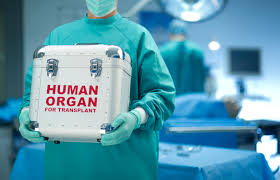 If navigating the DMV wasn’t stressful enough, they force us to decide whether or not we will be organ donors.  Of course, the DMV would not wish a fatal vehicular demise on anyone.  But, in such an unfortunate event time is of the essence. If there are organs to be donated they need to be preserved and transported quickly.  What better vehicle for that information than our driver’s license.

I do not know about you, but I like the idea of being an organ donor more than actually donating an organ.  I feel guilty not checking the box or signing my driver’s license.  I feel so, ironically, heartless.  But there is just something about other people taking my innards that bothers me, too.  Altruism and barbarianism clash at the DMV, including the decision to be an organ donor or not.

On one hand, I love the idea of my pancreas saving the life of the next Mozart or Ozzie Smith.  They will write stories about and name hospital wings after me.  I’d be a hero.

What good are my kidneys in a casket?  Am I so selfish as to want my liver decomposing with me than helping someone else live?  If I would risk my life to save a drowning man then why wouldn’t I want to save him from intestinal cancer in my death, where there is literally no risk to my life?

On the other hand, I hate the idea of being “recycled.”  It might be just a pericardium but it’s my pericardium!  I’ve had it my whole life and we’ve been through everything together.  The idea of it living on in someone else feels so utilitarian.  Am I worth only the sum of my working parts?  I don’t want people hovering like vultures at the crash scene salivating over my corneas.

I speak tongue-in-cheek (and admittedly irreverently) largely out of ignorance.   I know the reality is obviously well between heroism and vulturism.  I hope those who have benefited from organ donation will forgive me for making light of such an important issue.  And it really is important.  I will think far more soberly should I, my wife or child be next on the list for a kidney or heart.

But is organ donation biblical?  Is it a particularly Christian thing to do?  Is the Bible relevant to this discussion?

Biblical authors certainly did not anticipate the possibility of organ donation.  That would have been as space age to them as smartphones were to our grandparents, or hovercrafts are to us.  Although, God did “transplant” one of Adam’s ribs (Gen 2.21-22)!

Scripture is silent on whether or not Christians should or should not be organ donors.  That does not mean, however, Scripture is irrelevant to the discussion (2 Tim 3.16-17).  We should however allow each other wide latitude in this decision.  One is neither unholy for wanting everything in the grave with them, or holy for donating their whole body to science.  Wanting to keep all your organs is not sinful.  Wanting to donate all of them is not inherently righteous.

1.  We must consider organ donation in light of the gospel.  We live in a world of amputees, malformed babies, cancerous livers and car wrecks.  That actual humans, the crown pinnacle of God’s creation, would suffer so inhumanely testifies to the extent and nature of our sin.  We cannot say a woman suffers ovarian cancer because of a particular sin, but that anyone suffers from anything is itself a cancer on an otherwise “very good” world (Gen 1.31).  While we cannot help but ask why this tragedy happened to me, the larger question – the question of Scripture – is why any tragedy happens to anyone.  Scripture is about answering that question and providing God’s remedy for it.

In Adam we invited this sort of world, a world where organ donation would be necessary.  We thought it was going to be a world where we are gods, but we’ve become anything but.  We invited a world where organs get diseases and shut down.  It’s a fallen world.  And God has redeemed this fallen world through Christ.  Jesus ushered in the world-as-it-should-be and will be.  He brought in the world where men never sin and always love.  In his world, everyone is reborn with vigorous hearts devoted to God’s glory and purpose.  And he died to suffer the ultimate penalty for those who chose this world over his.  He was raised so those who believe would be human again.

So, while a new pancreas might save someone or me, it saves only for a while.  It doesn’t save in the most-needed sense.  Eventually, sin, Satan and death catch up to the healthy organ.  The coroner will record cancer or trauma as the cause of death, but it is sinfulness that co-opts cancer to ravage our bodies.  God has not ultimately resolved the reality of kidney failure through dialysis.  He resolves what has gone wrong with this world through resurrection, which leads us to the next consideration.

2.  God promises a bodily resurrection (1 Cor 15).  For Christians, that will mean imperishable, powerful, spiritual, heavenly, Christ-like bodies.  As Christ was raised, so shall we be (Rom 8.11).  Therefore, that resurrection assumes everyone is raised intact.  That is, the Christian soldier who died legless because of an IED will be raised with both legs.  God will resurrect the Christian astronaut who was incinerated from a Shuttle explosion with all his/her body intact.  And the Christian who was buried sans kidney and liver will be resurrected to eternal life with both. (Although, I have no idea about the “voiding” function of those organs in heaven).  That is simply the power of Christ!

Consider John the Baptist.  He was beheaded by an enraged and puppy-whipped Herod (Mk 6.17-29).  John the Baptist was buried either without or at least separate from his head.  Yet, the no-one-is-greater-than John the Baptist will be resurrected with his head firmly attached to his body for eternity (Lk 7.28).

The apostle John saw “the souls of those who had been beheaded because of their testimony” (Rev 20.4).  I am not sure how you see a soul, much less a beheaded one, but that wasn’t John’s point.  Although they were beheaded in this life John saw them gloriously vindicated and adorned (Rev 6.9).

Because of Christ’s own resurrection there will be no headless, or any other -less, Christians in glory.  Christ’s salvation is not a temporary measure  but an eternal one.  It is the Christian’s hope that Jesus has overcome this cursed world, and my cursed body in it, with the precious gift of his own life (Rom 6.23).

3.  Organ donation must be seen in light of God’s providence.  As horrible as the occasions are that require organ donation, God nevertheless stands behind those circumstances.  God oversees our diseases and fatal left turns (Jn 9.3).  And he sympathizes with us in Christ, who lived neck-deep in this world gone wrong (Heb 4.14-16).  God gave us this organ instead of that one.  By his providence, I was born to a mother who died from colon cancer rather than one who didn’t.

Whatever suffering he requires from his children in this life serves to invigorate their worship in the next (1 Pt 4.12-13).  This is hard, which is why only God can create this sort of faith in folks like us.  As hard as it is to understand, we often learn more from those Christians who die well in Christ than those who live longer for him.

God has wired us all with the desire to live.  We are image-bearers of the Living God so we want to live.  But God has prescribed we only live in, because of and for him.  As much as we want to live we cannot will ourselves to do so.  We are utterly dependent on the God who gives life and takes it away (Ps 90.3).  Our life is God’s to do with what he wills (Phil 1.21-26).  God designs our suffering so that we will want to live only and in Christ.  Therefore, new organs do not save us.  God saves us in Jesus for all eternity.

4.  Organ donation can be seen as an extension of Christ’s own age-to-come ministry.  When Jesus arrived on earth he brought him realities of the coming age.  He brought his world into our world.  In his world, the blind see, the lame walk, the deaf hear, the dead live: the gospel is preached (Mt 11.2-6).  God of very God, Jesus came to live as Man of very Man.  In fact, the True Man.  Man as God intended.  Man without sin.  Man with whom God is most pleased, and who is most pleased by God.

Therefore, any merciful act that alleviates suffering is a reflection of Christ’s own age-to-come ministry.  We demonstrate that Christians love the triumph of mercy over anguish.  We realize we can only offer temporary relief, but we hope that relief will lead to eternal worship of Jesus (Mt 25.31-40).  If Jesus was about helping the blind, lame and feeble then it is becoming of his followers to do likewise.  Organ donation or not, we should all pray to be more generous with what is ours.

Christians who donate organs, in life or death, are providing a merciful service to suffering souls.  God  be praised as they do so with Christ and eternity in mind.  Those who don’t are not robbing anyone of salvation.  God be praised he has re-birthed us in Christ through resurrection (1 Pt 1.3).

Whatever you decide, I hope you will afford me a little more time to decide.  I’m still waiting for my number to be called.