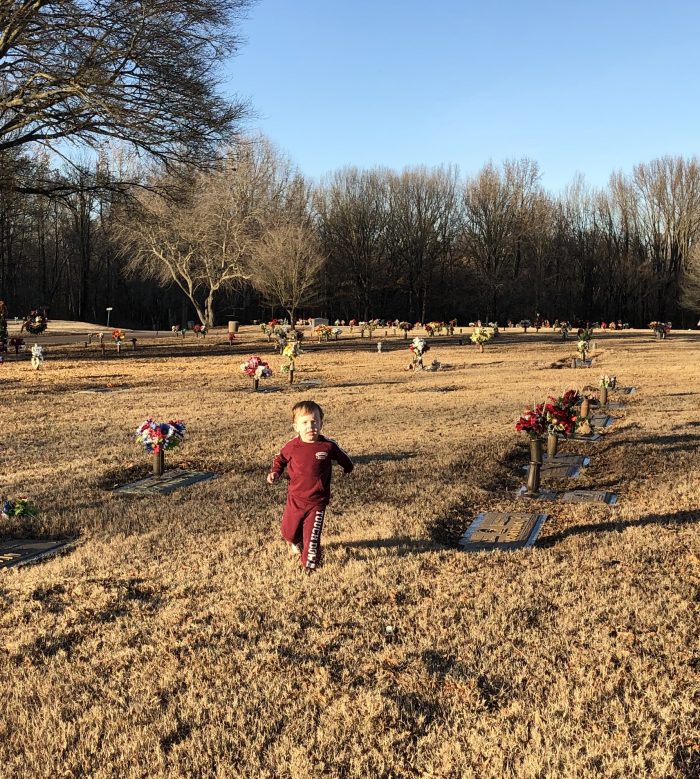 Mom and Dad’s headstone was just as we left it last time. As were my memories. The tears were new, though. Amy read a sweet reflection on death as an answer to Christ’s prayer in John 17. The grave is a form of incense.

A fresh grave was dug nearby. I pray that family is comforted by Jesus. In the distance a family released balloons. I pray they will see their child soon.

And there was our three-year-old son, running around like it was an amusement park built just for him. Weaving in and out of headstones to escape the lion chasing him. Jumping over them like an Olympian on his way to gold. Breaking off an end-around like it was the Super Bowl.

He didn’t want to leave.

Like most I assume, my parents taught me to revere cemeteries. Never walk on the body. Whisper. Be still. Dust off the tombstone. Remove and replace faded flowers. Irreverence is indeed offputting among the dead.

But there was Jesse treating this burial ground like a playground.

My instincts kicked in. I was about to uncork the lecture of his life. (I’m not sure lectures are becoming of cemeteries, either.) But I couldn’t do it. Suddenly, I didn’t see an irreverent rebel dancing on the dead. I saw a child in eschatological play. He didn’t know that which is what made it so profound.

While I sobbed and reminisced, he laughed and hoped. Maybe he was the theologian here and I the novice. Death surrounded him and he, well, lived. He Lived. For this toddler death had no victory. It had no sting. It didn’t matter to him he’d never met Papa Max.

So I worshiped. The tears were different.

“But we do not want you to be uninformed, brethren, about those who are asleep, so that you will not grieve as do the rest who have no hope” (1 Thess 4.13).

Those who follow Christ visit cemeteries differently than those who don’t. At least they’d better. Jesse doesn’t know much Bible yet, much less about resurrection, but it seems he’s already getting the picture.

He will swallow up death for all time, and the Lord Yahweh will wipe tears away from all faces, and he will remove the reproach of his people from all the earth; for Yahweh has spoken (Is 25.8).

And I heard a voice from heaven, saying, “Write, ‘Blessed are the dead who die in the Lord from now on!’ “Yes,” says the Spirit, “so that they may rest from their labors, for their deeds follow with them” (Rev 14.13).

Blessed are the dead who die in the Lord.

Maybe that’s why Jesus said, “Let the children come to me; do not hinder them, for to such belongs the kingdom of God” (Mk 10.14). I took Jesse to the cemetery. Before I could hinder him Jesse took me to the Kingdom. We went to visit two full tombs and left reminded they’re all but empty.

We won’t always let Jesse run roughshod in the cemetery. Jesus wept in a cemetery, too. There will plenty of time for that lecture. But at least for today we let The Lion chase Jesse and the whisper became a roar (Rev 10.3).