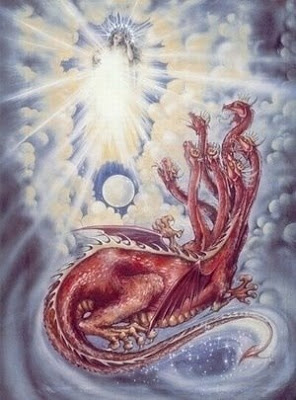 “. . . and the dragon stood before the woman who was about to give birth, so that when she gave birth he might devour her child.  And she gave birth to a son, a male child, who is to rule all the nations with a rod of iron; and her child was caught up to God and to His throne” (Rev 12.4-5).

For nearly 200 years we have loved the soothing Christmas melody of Silent Night, Holy Night. We should sing such a peaceful song for such a Peaceful Savior. Angelic hosts broke the story of Christ’s birth in obscurity. No reporters.  No paparazzi. No TMZ.  In a word, God whispered.

It took two years for King Herod to even learn about it and that from Oriental astrologers.  That night was silent in the sense relatively few and unassuming people knew about the King’s arrival. God chooses foolish things to shame the wise (1 Cor 1.27).

A far different scene was playing out behind the curtain of the cosmos, though.  That night was indeed holy but it was anything but silent in the heavenly realm.  It was quite violent.

John described the scene colorfully in Revelation 12 where he portrayed the interadvental period (i.e. the time between Christ’s two advents, or now) as a fierce, universal war.  Jesus was born in Bethlehem into the cosmic war to end all wars.  In fact, to end The War.

He introduced a sun-drenched, moon-footed woman crowned with twelve stars (v1) who was the embodiment of Israel (cf. Gen 37.9-10).  She painfully awaited the birth of her child: Messiah himself.  She had been in painful labor for thousands of years.

The woman has a bloodthirsty antagonist: a seven-headed, ten-point dragon with not-a-few crowns himself (v3).  A formidable foe. Satan himself (v9).  As much as the woman wanted to give birth the dragon wanted to kill her child (v4).  He was the “serpent of old” and John sets the stage for another Genesis 3 showdown.  Same old devil, brand New Adam.

Her son was born: a Shepherd-King who would shepherd-rule (Gk. poimano) the nations with ironclad authority (cf. Ps 2.9).  With venom dripping from his mouth the dragon crouched with all bloodthirsty confidence he would devour the child before he could assume his rightful place.  There was a war on Christmas.

But “her child was caught up to God and to His throne” (v6).  In two verses John took us from Christ’s birth to ascension.  Jesus was born into danger and ascended into glory as Christus Victor.

The dragon was no match for her Child no matter how hard he tried. Satan co-opted Herod, who killed all the boys two-years-old and younger in Metropolitan Bethlehem (Mt 2.16).  All the boys except The Boy, that is.

Satan cornered a famished Jesus alone on his home turf — the wilderness — but even the weakest Jesus was stronger than the dragon (Mt 4.1-11).

Satan hijacked one of Jesus’ closest followers in a Trojan horse maneuver (Mt 16.21-23). The Child did not take the bait.

The Devil threw his knockout punch on a fateful afternoon outside Jerusalem. Darkness, earthquake, dread, despair.  Blood and water.  A stone.  Another Adam buried.

But her Child, with news broadcast again by an angelic host to second rate Jews, lived. God whispered louder.  Her dead and buried Child actually lives!  And the dragon lost what heavenly privilege he had to accuse the brethren before God (vv7-12).

He bound the strong man and forever banished him from God’s presence and place (Mt 12.28-29).  Satan no longer has the run of Eden any longer.  There are no more Adams to deceive.  The Second Adam — her Child — earned our way back into Paradise “because of the blood of the Lamb” (v11).  The tender and mild Lamb defeated the ferocious and mutinous dragon.

The earth-confined dragon now attempts to cause the most damage in the little amount of time he has left (v13).  If he couldn’t devour her Child he will seek to devour his brethren. He would persecute “the woman”: the New Israel, the Church, those who hold to the testimony of Jesus (v17).

But the woman has a Perfect Husband who always protects her (v14).  Be it Cain, Esau, Pharaoh, Sennacherib, Nebuchadnezzar or Caesar (or Islam or communism or ISIS or . . .) the serpent of old never has enough firepower to defeat the Church. God gives her eagle’s wings (cf. Exod 19.4) to fly into the wilderness where God protects her from the flood (think Red Sea or Jordan River).

We live in that wilderness now. We wander this age between promise and fulfillment, nourished by the Bread of Life and Living Water.  God protects us now because of “the blood of the Lamb,” Christ our Passover has staved off our death angel (1 Cor 5.7).  The Lamb kicked the dragon off the throne Adam vacated and forever sits at God’s right hand interceding for us (Heb 7.25). Satan’s venomous flood will not reach us.  Eve’s Son stood with his heel on the dragon’s stiff neck (cf. Gen 3.15).

Perhaps it was silent for us but that holy night was violent in the heavens.  Even still, all is calm.  All is bright.