“Bring the whole tithe into the storehouse, so that there may be food in My house, and test Me now in this,” says the LORD of hosts, “if I will not open for you the windows of heaven and pour out for you a blessing until it overflows” (Mal 3.10). 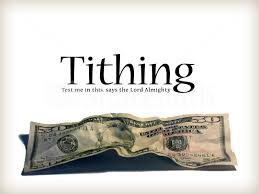 Malachi 3.10 is often the go-to text to jump start a church’s capital campaign or boost sluggish giving.  When in doubt, play the “whole tithe” card on those robbing from God and they will open their checkbooks in hopes of a bumper crop.  After all, isn’t “the tithe” a biblical requirement on all God’s people for all time?

While this verse is often lifted out of Malachi as the defining measure Christian giving, it is hardly the main point of Malachi’s message.  In fact, the tithe (or lack thereof) was one of six disputations God had against Israel.  They held a shallow view of God’s electing love (1.2-5).  They wanted McChurch with “drive thru” worship (1.6-2.9).  As spiritual adulterers they brought shame on covenantal brotherhood and marriage (2.10-16).  They held a double-standard of justice, demanding swift retribution when wronged but ignore their own wrongdoing (2.17-3.6).  They arrogantly concluded their “faithfulness” had not paid off and God was a shyster (3.13-15).

These disputations rise and fall together.  They all reflect a people discontent with God.  Therefore, we can hardly lift out Malachi 3.10 as if it stands alone.  If we are going to enforce “the whole tithe” then we cannot fail to emphasize its concomitant failures as well.  A people who would rob God are also a people who discount God’s sovereign election, cheapen congregational worship, tolerate injustice and divorce, enforce double-standards in holiness and make God a debtor to them.

Malachi 3.10 is hardly about Christian tithing, but it is part of Malachi’s message of Christian salvation.  Israel would never right themselves no matter how hard they tried.  Despite every reason to be otherwise, they (and we) were simply not the sort of people who enjoyed God’s presence and provision.  God would send Elijah to mark the beginning of “the great and terrible day of the LORD” (4.5)  That day dawned some 400 years later when John the Baptist announced the Lamb of God who takes away the sin of the world.

Jesus did not come to make us tithers.  The One who owns the kingdoms of the world hardly needs a dime from us.  Our money is no good in his kingdom where everything has been pre-paid  by Christ’s blood (Is 55.1; Rev 21.6).  He came to make us open-handed lovers of God and one another.

If not the tithe, then what does the Christian give?  Stay tuned for Parts 2 and 3.