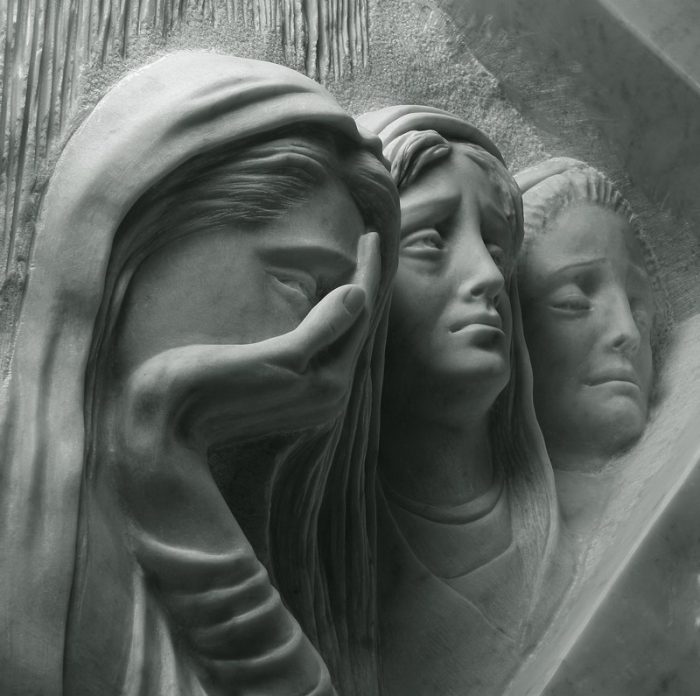 “It was the preparation day, and the Sabbath was about to begin.  Now the women who had come with Him out of Galilee followed, and saw the tomb and how His body was laid.  Then they returned and prepared spices and perfumes.  And on the Sabbath they rested according to the commandment” (Lk 23.54-56).

Luke loved the underdog, especially if the underdog was a woman.  Between Luke-Acts, he used γυνή 60 times which was about as much as all the other Gospels combined.  The heroes of Christ’s kingdom would be far different from Caesar’s.  The cornerstone the builders rejected (Ps 118.22; 1 Pt 2.7) would build his house using similarly despised stones (1 Pt 2.4).

Luke drew special attention to the women who witnessed Jesus’ passion (22.57; 23.27, 49, 55; 24.22, 24).  They stand in contrast to the macho religious leaders who railroaded Jesus. Despite what the bloviating Jewish chief priests and scribes prattled about themselves, Luke’s silent women were true Israel preserving the last shred of Messianic hope in the nation.  They mourned Jesus’ death while the religious elite celebrated.

Luke painted a masterful stroke in 23.54-56.  Jesus had died and no one cared about burying him except Joseph of Arimathea, a renegade member of the Sanhedrin, and αἱ γυναῖκε.

The courageous women spied out where Joseph buried Jesus (v55).  And they saw “how His body was laid” (ὡς ἐτέθη τὸ σῶμα αὐτοῦ).  They not only saw where Jesus was buried, but how. Why that detail?  Because there had been no time to properly prepare Jesus’ body for burial. All Joseph had time to do was wrap Jesus up and lay him in the tomb as is.  His body caked with blood, sweat, dirt, spit.  Flies swarming.  Fluids oozing.

These women could not stand for it.  They would not.  So they prepared (v56a).

It was “the preparation day” for Sabbath so these women spent what time they had left preparing spices and perfumes for their Jesus who rested filthily in a cave.  And when Sabbath “dawned” they “rested according to the commandment” (v56b).

Little did they know, these women built the bridge between the Sabbath and The Sabbath. They were preparing for Sabbath in a way they never dreamed.  While they rested on the Sabbath day, The Sabbath rested for them (Mt 11.28-30; Heb 4.3, 9-10).  As they prepared Jesus for burial, Jesus–the Sabbath Rest–prepared them for life according to the commandment (Jn 10.18).

Indeed the Sabbath was soon to dawn like it had never dawned before.  And the least likely among us will see it first.

But on the first day of the week, at early dawn, they came to the tomb bringing the spices which they had prepared. And they found the stone rolled away from the tomb, but when they entered, they did not find the body of the Lord Jesus (Lk 24.1-3).

For these women, the Sabbath had not ended.  It had just begun.