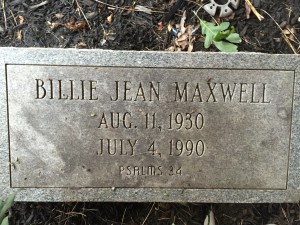 Mom died 25 years ago today. It was a remarkably Christian death. She died well. Painfully, but well.

We buried her across the street from the Itta Bena cotton field in which she was born. Under the magnolia next to her dad, her sister and her infant son. It was brutally hot that day in the Mississippi Delta.

Dad never remarried. Said he would never find anyone better so why settle.  Most days he stills wears his wedding band. For better or worse ’til death do they part. He’s still honoring his vow. In fact, about ten years after the funeral Dad moved her casket to a local cemetery. She was too far away. They will await the resurrection together.

Everybody’s mom dies. Every spouse eventually becomes a widow(er). But I just don’t want to waste her death or Dad’s example. There are many days I’m still that 16-year-old kid trying to make sense of God’s providence. I’ve not made much sense of it yet. But what’s different now than 25 years ago is that I’m okay with that. “Naked I came from my mother’s womb, and naked I shall return there. The LORD gave and the LORD has taken away. Blessed be the name of the LORD” (Job 1.21).

By God’s grace, I was privileged to watch a Christian die well even though I wasn’t one myself. She must’ve wrestled many days with her God as much as her cancer. But at the end of those days God always won out. She may have complained to God but I never once heard her complain about him. She always brought honor to Christ. She died in him in every sense of the word. Her last breaths left a sweet aroma of Jesus that those who knew her enjoy to this day.

By God’s grace, I’ve watched a man widowed after 38 years. I was a high school kid with a 65-year-old roommate. Needless to say, we had more than a few rough patches thanks to my arrogance and petty rebellion. But Dad still raised his son the best he knew how. He still honored that boy’s mother.

Dad never retreated. He’s buried his parents, an infant son, his wife, his brothers, his in-laws and all his aunts and uncles. And he still pressed in further into the life of the church and his friends. He never retreated. He’s walked slowly but surely in faith. An imperfect faith to be sure but he’s still on the journey. He has battled severe loneliness for a quarter-century.  But I never saw him pout. In fact, it’s only been in the last two years that I’ve seen him cry. That’s no particular virtue per se, but he would bear his burdens so we wouldn’t have to.

We may do more caring for Dad then he does for us these days. But he still fathers us. Just like he promised her.

While I draw this fleeting breath,
when mine eyes shall close in death,
when I soar to worlds unknown,
see thee on thy judgment throne,
Rock of Ages, cleft for me,
let me hide myself in thee.
(Augustus Toplady)

One thought on “25 Years a Widower”