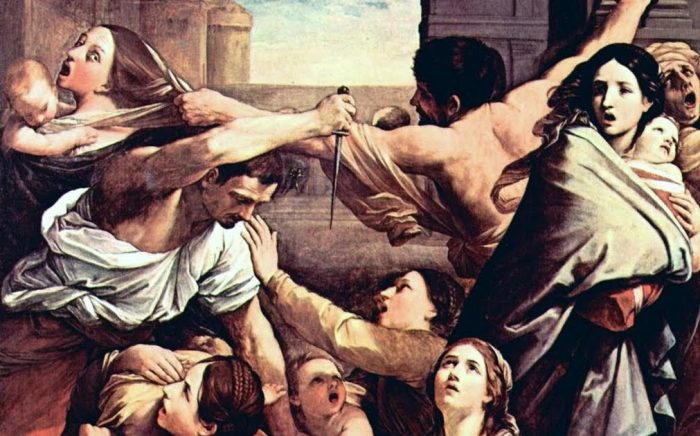 For many Christmas is as much about family feuds as it is family feasts.  There is no greater family feud than the one at the first Christmas.

God slipped into town through the ghetto and Satan stirred in the palace. Herod the Great heard someone Greater had been born (Mt 2.2).  And in Bethlehem no less which only added to the Messianic lore (Mt 2.5).

There had been pretenders before.  For some 40 years the ruthless Herod “neutralized” them be they kith or kin.  Messiah or not, this kid in Bethlehem would be no different. Herod plotted to handle this threat himself but the plan failed (Mt 2.7-12).  The magi dreamed of better days (Mt 2.12).  So Herod sent out his henchman to deal with yet another Messianic upstart.  Killing all toddling boys in Greater Bethlehem should do it. Another rival up, another rival down.

Little did Herod know God outmaneuvered him the night before. While Herod plotted anxious revenge, the Greater One slept peacefully in Egypt (Mt 2.13-15).

There was more to this power play than meets the eye.  Herod “the Great” was a bit player in an age-old drama.  Herod was an Idumean, or an Edomite in Hebrew parlance.  Edom was the land of Esau (cf. Gen 36.9). Herod was a son of Esau.

Jesus was a Bethlehemite from the land of Judah (cf. Micah 5.2).  Jesus was a son of Jacob.

The “slaughter of the innocents” was yet another iteration of the feud between Jacob and Esau. The chosen younger son versus the rejected older son. The one whom God loved versus the one he hated (cf. Mal 1.1-5; Rom 9.10-13).  Esau never killed his brother Jacob, but not for lack of trying (cf. Gen 27.41).  Rebekah helped Jacob escape by night then (Gen 27.43-45) and God helped him again now.  Esau was always a step behind.

But Esau would neither rest nor care about the collateral damage.  No wonder Rachel wept (Mt 2.18).  Her enraged brother-in-law was at it again and her children in Bethlehem suffered for it.  Still, Jacob lived and would inherit what was rightfully his — the Father’s eternal inheritance.

The feud between Jacob and Esau was nothing new, either.  Even it was part an age-old family feud stretching back generations: Isaac vs. Ishmael, Abraham vs. Haran (via Lot), Shem vs. Ham and Abel vs. Cain.  It would stretch beyond them as well: Joseph vs. his older brothers, David vs. his better brothers, Amnon vs. Absalom, Rehoboam vs. Jeroboam.  On and on and on.

The unlikely younger son always triumphed over the older, rejected son. God always raised up a Seth: “another offspring” — a son of sovereignty — to carry on the younger son’s undeserved favor and call upon the name of the Lord (Gen 4.25-26).

Esau took took his final shot at the cross where he’d finally gotten rid of his brother. Once a sellout, always a sellout.  Godless is as Godless does (Heb 12.16).  No more Jacob. The tyranny of God’s sovereign favoritism was over at last.  The seed of the woman was buried and her children scattered. Esau would rule with birthright in hand and a full belly.