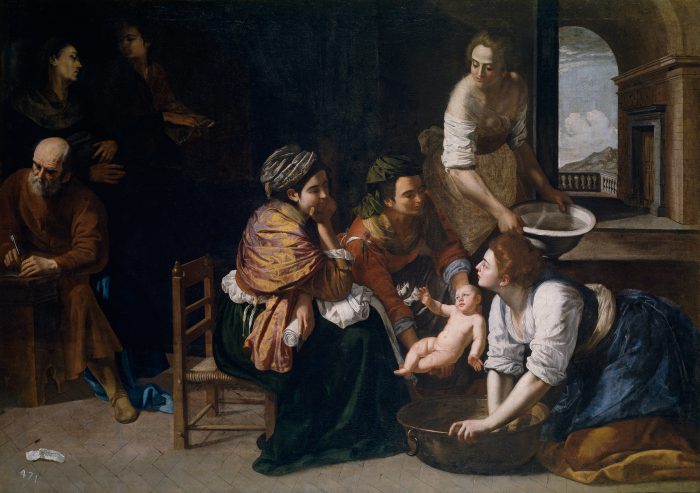 Having a child at their age was biologically impossible.  We could excuse Zacharias for being skeptical.  But, God didn’t.  Gabriel muted him for nine-plus months (Lk 1.20).

Zacharias had the news Israel had awaited 1,400 years.  And he couldn’t say a word.  Imagine the surprise when Elizabeth started gaining weight.  She thought it best to stay hidden (περιέκρυβεν) and worship (Lk 1.25).  After nine months she sent her friends and family the birth announcement (Lk 1.57-58).

Zacharias would be unmuted when he scratched out the boy’s name on some scrap paper (Lk 1.59-64).  And then it all made sense–Benedictus Dominus Deus Israel.

God had come to save Israel.  Blessed be God.

And has raised up a horn of salvation for us in the house of David His servant—as He spoke by the mouth of His holy prophets from of old—salvation FROM OUR ENEMIES and FROM THE HAND OF ALL WHO HATE US (Lk 1.69-71).

This is great news!  Shalom is happening!  They will know Messiah’s power and salvation when he routs Rome and restores Jerusalem’s worldwide prominence.

Not so fast.  Before liberation, forgiveness.

To give to His people the knowledge of salvation by the forgiveness of their sins (Lk 1.77).

John the Baptist will not declare war.  He will declare forgiveness.  Before Jesus conquers the world he will first conquer his people.

Israel will know Yahweh’s salvation, not when Roman blood runs through Jerusalem streets, but when Messianic blood courses their veins.  Before than can be peace from their enemies there must first be peace with God (Lk 1.79).  God’s people must first be forgiven before they can be free.

Peace.  Shalom.  Our hearts crave it.  We want to be saved from our enemies and those who hate us.  Be it people, memories, decisions, diseases, or systems.  We want to be free from it all so we can finally rest.

But the reason we have enemies at all is because we made ourselves enemies of God.  We don’t merely have enemies; we are enemies ourselves.  We sit in the very darkness we complain about (Lk 1.79).  We cast our own shadow of death.  We are as much hateful as we are hated.

We don’t want a world where we don’t have enemies, but a world where there are no enemies at all (cf. Is 2.4; 11.6).  We want God to save us.  Really save us.  That means before God removes the enemies against us he must first forgive our sins against him.  No victory before humility.

God will not save those who have no need of his forgiveness (Mk 2.17).  If you’ve only been offended, but never offensive (or at least as offensive), then God promises no salvation for you.