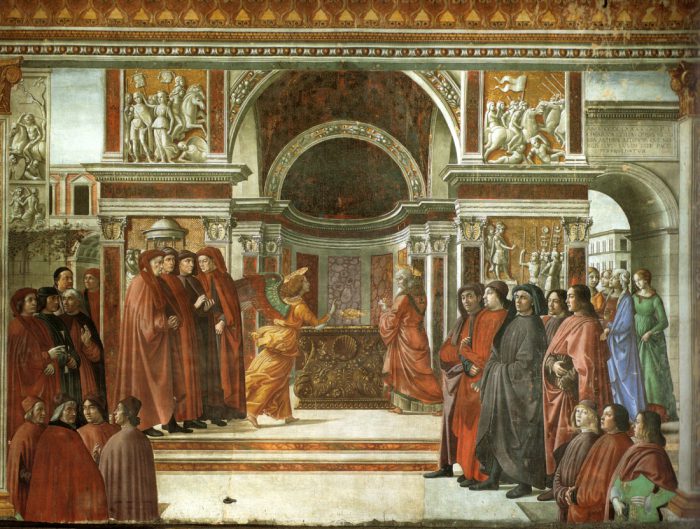 “But the angel said to him, ‘Do not be afraid, Zacharias, for your petition has been heard, and your wife Elizabeth will bear you a son, and you will give him the name John.  You will have joy and gladness, and many will rejoice at his birth.  For he will be great in the sight of the Lord; and he will drink no wine or liquor, and he will be filled with the Holy Spirit while yet in his mother’s womb.  And he will turn many of the sons of Israel back to the Lord their God. It is he who will go as a forerunner before Him in the spirit and power of Elijah, TO TURN THE HEARTS OF THE FATHERS BACK TO THE CHILDREN, and the disobedient to the attitude of the righteous, so as to make ready a people prepared for the Lord.'” (Lk 1.13-17)

Zacharias and his priestly squad billeted in Jerusalem for their bi-annual temple assignment.  His number was called to burn incense in the temple on which Israel’s prayers for salvation would waft to heaven.  It was bucket list privilege for any priest.   In Zacharias’ case, it was also a once-in-an-eternity event for Israel and the whole world.

It was long past time for Zacharias and Elizabeth to have any children (Lk 1.18).  They’d stopped praying for a son after Elizabeth went through menopause.  Who wouldn’t?  They would be grandparents by that time.  Still, Zacharias performed his priestly ministry with all faithfulness and hope in Yahweh (Lk 1.6).

There he was.  Praying that Israel have a Son even if he never would.

Zacharias was the latest in a long line of priestly prayers.  In fact, Israel had been praying 400 years for Elijah to come (cf. Mal 4.4-6).  One hundred generations of smoke had filled Jerusalem’s temple in hopes fertile prayers would bear a pregnant woman.  None of the hope-to-bes and wanna-bes along the way lived up to the promise.  No matter how hard Israel tried she simply could not produce a Savior.  God would have to do that for them. And in them.

Most of Israel had stopped hoping.  The nation was long past child-bearing.  But still a faithful few stood sentinel while Zacharias took their post-menopausal prayers to the smoldering altar (v10).

As Zacharias fanned the aromatic smoke Gabriel showed up unannounced.  Angels always do.

Before that day, only one other person in human history had seen Gabriel: Daniel.  Gabriel was dispatched to help Daniel “understand that the vision pertains the time of the end” (Dan 8.17).  The beginning of the end would be painful and bloody. God’s people would suffer.  It made Daniel sick (8.27) and repentant (9.20).

While Daniel was praying, Gabriel showed up again “in my extreme weariness about the time of the evening offering” (9.21).  Daniel’s prayers were heard and should be comforted by the Ace up Yahweh’s sleeve: a crucified and risen Messiah will one day have the last word (10.10-21).

God smelled the aroma.  God heard the petition.  Elijah was finally coming.  Israel would have a son.  And if Elijah was coming then Messiah wasn’t far behind.  The Ancient of Days was dusting off his seat (Dan 7.13-14).

There was more.  Israel’s son would be Zacharias’ son, too!  The generations of prayers Zecharias offered on behalf of Israel had included those dormant prayers he and Elizabeth had long stopped praying.  Those prayers still simmered over the fire of the heavenly altar.

Israel would have a son because Elizabeth will bear a son.  As he did with old, barren Sarai (Gen 11.30; cf. Lk 1.7) God would resurrect Elizabeth’s dead womb to give life to a dead people.   Zachariah’s “joy and gladness” would pave the way for Israel’s repentance.

The whole scene explodes with heavenly majesty.  That Gabriel appeared where and to whom he did shows God’s redemptive and literary genius.  Elizabeth’s infertility was also a metaphor for Israel’s barrenness.  After 400 years of prophetic silence, royal weakness, and Messianic absence, Israel herself was barren and “advanced in years” (vv7, 18).  Yet, a meager remnant followed priest after priest year after year, decade after decade, century after century to the altar of incense. Praying. And praying.  And praying until God heard the petition and opened Israel’s womb.

Like those faithful and prayerful Israelites, the New Israel eagerly awaits the return of her King after two millennia of delay.  Nevertheless, “the end of all things is near; therefore, be of sound judgment and sober spirit for the purpose of prayer” (1 Pt 4.7). The incense still rises (Rev 5.8; 8.3-4), the Priest still intercedes (Heb 7.25) and God still smells the sweet aroma.  And we keep praying for the arrival of the Son.