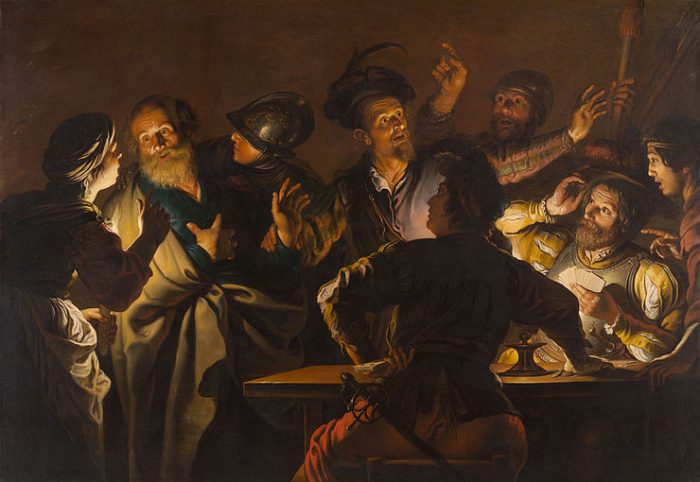 Matthew wove a subtle thread through his crucifixion account.  All the Gospel writers detailed Judas’ betrayal of Jesus, but only Matthew recorded what happened to Judas afterward (Mt 27.3-5; cf. Acts 1.18f.).  He did so in such a way to compare and contrast Judas with Peter: two deniers of Jesus.  Matthew magnified the sovereignty and grace of Jesus to secure his own despite their failings.

Satan tried every tactic to make Jesus flinch.  He even infiltrated the apostolic ranks and hijacked both men.

Wanting nothing to do with a dead Messiah, Peter rebuked Jesus for talking crazy (Mt 16.22). Wanting nothing to do with a mouthy disciple, Jesus snapped around telling Peter, “Get behind me, Satan!  You are stumbling block to me; for you are not setting your mind on God’s interests, but man’s.” (v23).  The “rock” on which Jesus would build his church (v18) was first a satanic stumbling block in the way.

A strident Peter felt confident he was on the rise in the administration.  After Passover he assured Jesus he had his back no matter what (Lk 22.33).  A sympathetic Jesus assured Peter, “Simon, Simon, Satan has demanded to sift you like wheat” (Lk 22.31).  He will deny Jesus three times by sunup.  It was Job all over again.  Jesus was letting Satan have a go at him.

Meanwhile, unbeknownst to Judas himself he was in Satan’s hip pocket all along.  Jesus was not fooled.  He knew from the beginning of his ministry he chose a devil (Jn 6.70).  If Satan couldn’t get Jesus in the open wilderness he would mount a sneak attack through his friends.  At the same Passover, where Satan salivated over Peter, he also “entered into Judas” (Lk 22.3) . . . “the devil having already put into the heart of Judas Iscariot, the son of Simon, to betray Him (Jn 13.2).

After the rooster crowed, Peter “went out and wept bitterly” (Mt 26.75). Immediately, Matthew turned to Judas.  He was an accomplice to Jesus’ murder. He “felt remorse” and gave a refund to the conspiratorial priests (Mt 27.3).  They wouldn’t be lectured by some low-life snitch so they refused the money.  Judas chunked the money anyway and “went away and hanged himself” (v5).

Matthew’s literary genius is evident.  Two disciples.  Both conscripted by Satan.  Both betray Jesus. Both suffered profound guilt.  Both were remorseful.  Only one was saved. Why?

Because Jesus interceded and protected Peter and not Judas.  Having promised Peter he would go toe-to-toe with Satan, he also promised:

Though an outright denier of Jesus, Peter would ultimately be safe because:

“While I was with them, I was keeping them in your name which you have given Me; and I guarded them and not one of them perished but the son of perdition, so that the Scripture would be fulfilled” (Jn 17.12).

Jesus interceded for and guarded prideful Peter.  He left perditious Judas to be destroyed. Jesus let Satan’s leash out on Peter but he unleashed Satan on Judas.

So what did the two men do with their guilt?  They did not assume themselves less guilty. What did they do with their remorse?  The one whom Jesus guarded eventually runs (or rather, swims!) to Christ for mercy (Jn 21.15-17).  The betrayer assumed the guilt and hung himself.

How do you know you are a Christian?  Christ’s voice drowns out the rooster’s crow (Jn 10.4, 27).  And after weeping bitterly over your sin, you run to the very One you’ve betrayed.  He forgives you.  He restores you.  He strengthens you and you strengthen your brothers.

“Blessed be the God and Father of our Lord Jesus Christ, who according to His great mercy has caused us to be born again to a living hope through the resurrection of Jesus Christ from the dead, to obtain an inheritance which is imperishable and undefiled and will not fade away, reserved in heaven for you, who are protected by the power of God through faith for a salvation ready to be revealed in the last time” (1 Pt 1.3-5).

Protected by the power of God through faith.  Peter would certainly know something about that, wouldn’t he?

3 thoughts on “A Tale of Two Betrayers”