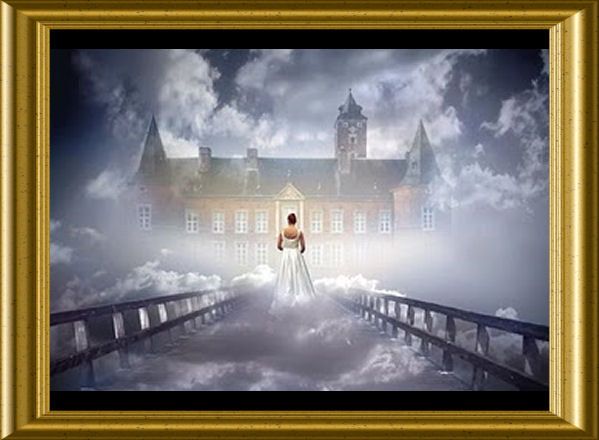 Did Jesus promise to build each of his followers a mansion for their eternal enjoyment?  After all, Jesus is God and was a carpenter.  Our God also builds houses?  He must be able to build us the best mansions the universe has ever seen.  We all have our dream home.  What could be better than having God design a city whose golden streets are lined with dream homes Jesus built for us?

And let’s not forget our Victory in Jesus:

I heard about a mansionHe has built for me in glory.And I heard about the streets of goldBeyond the crystal sea;About the angels singing,And the old redemption story,And some sweet day I’ll sing up thereThe song of victory.
(E.M Bartlett, 1939)

A mansion built for me in glory.  Where would Southern Gospel music be were it not for these mansions?

Not so fast.  Jesus (and John’s context) demand an infinitely greater promise than keys to our dream home.  Jesus is not preparing blueprints for his heavenly suburbs.  He is preparing for us something infinitely and eternally greater.

Consider the context of Jn 14.1-3. The Last Supper began Jesus’ last few mortal hours with his disciples (Jn 13-17).  By that time the next day Jesus would be buried.

As his suffering neared Jesus prepared his disciples for a Messianic move much different than they expected.  The disciples expected to flank Jesus when he drove Rome (i.e. Gentiles) from Jerusalem.  With his typical misplaced bravado Peter promised he would fight until the end (Jn 13.37).

Jesus prepared them for a far different and greater kingdom than they expected.  They were confused and troubled; therefore, Jesus eased their anxiety (Jn 14.1).  They had not misplaced their faith. This was no bait-and-switch.  They believed in God therefore they should believe in Jesus despite what they would soon see happening.

We then hear Jesus famously promise to prepare and provide them many “dwelling places” in his Father’s house (vv2-3).

But Jesus is not a Cosmic Oprah who gives us all keys to new houses when we die: “You get a mansion, and you get a mansion!”  Consider ten reasons why Jesus loves us too much to build us each a mansion.

1.  Jesus clearly says there are many dwelling places (μοναὶ) in his Father’s house.  Even if he meant a literal gold-and-mortar structure, there is one house with many living quarters.  That sounds more like an apartment complex than gated community of multi-gazillion dollar homes.  But let’s not assume Jesus meant high-end condos, either.

2.  Any Jew would have known “Father’s house” to refer to the temple (Jn 2.13-22), not as a euphemism for heaven.  The temple is God’s dwelling place, where he lived and met with his people.  As with any nation, the Jews could show you where their God — Yahweh — lived.  Jesus’ Jewish disciples (and audiences) believed Messiah would renovate the temple, rid it of Gentiles and restore it to its global glory.  Jesus (and John) had been transforming that notion and leads us to the next consideration.

3.  The “Father’s house” is the temple which Jesus assumes to be himself (Jn 2.13-22).  Note carefully that when Jesus returns he will receive his disciples “to Myself” (πρὸς ἐμαυτόν) (v3).  He will not return to meet his disciples with keys to their mansions.  He will not receive them into their beachfront condo on the 18th hole.  He will receive them to himself,  i.e. the place where God lives and meets with his people.

4.  The “place” Jesus is preparing is “where I am” (v3).  We will be where he is.  That does not refer to a street address as though we will all have houses on the same street as Jesus who lives in the model home.  “Where I am” refers to the front row seat in the unrivaled, unrestricted glory of God. Where Jesus is is “at the right hand of the Majesty on high” (Heb 1.3).  The “place” Jesus prepares is nothing less than the eternal enjoyment of God’s glory and his love for us in Christ (Jn 17.24).  His place.  He is making room where he is for all of us.

5.  The “many” dwelling places speaks to the world-encompassing work of Christ to seat people from every nation, tribe and tongue in his place.  Jesus entered the cosmic “holy place” (Heb 9) where he has sat down in the full merciful presence of the Father.  He is making room in that very place for the millions upon millions of people for whom he died.

Jesus is making room on the firstborn son’s seat for all of God’s children to sit. There are many dwelling places in the Father’s house because “all the Father gives me will come me, and the one who comes to me I will certainly not cast out” (Jn 6.37).  Jesus — the True Temple — has made room for all of God’s children to sit next to the mercy seat.

6.  In order to prepare our “dwelling place” Jesus must first suffer, die and be buried.  Alone (Jn 14.28).  Jesus didn’t remove all the Gentiles from the Jerusalem temple.  He removed sin from all God’s children (Jew and Gentile) so they would enjoy unmitigated rest in God: where he is.  We will not live down the street from God.  God will live right next to (dwell with) us because that is where Jesus is.

7.  Only sons live in a father’s house.  Therefore, if the disciples wanted a place in the Father’s house then they must first be sons of God.  Obviously, the Pharisees and Jewish leaders thought they were the quintessential sons of God as they milled smugly about the temple.  They were certainly sons, but of a different father (Jn 8.44).  Jesus rid God’s place of false sons and populated it with true sons.  The only way to be sons of God was to be in the Son of God (Jn 15.15).  By preparing a place for us Jesus prepares his follower’s to enjoy the Son’s place in the Father’s house.

8.  All the sons receive the inheritance of the Firstborn Son.  “Many dwelling places” does not refer to the size of heaven.  It refers to how large and generous and loving Jesus is to give all sons his place and inheritance!  Jesus is not building you or me a house commensurate with our efforts in this life.  He is preparing one place, the place, for many residents (all the children the Father has given him) based on his merits.

9.  Peter was clueless in Jn 13.37-38.  Thomas fared a shade better, sensing Jesus spoke of something different but still assuming it was an earthly place (Jn 14.5).  If Jesus wasn’t going to Jerusalem to renovate the temple then they had no idea where he would be going.  There is no temple anywhere else.  If Jesus wasn’t going to furnish offices for them in his temple administration then where else would the Father’s house be? Nazareth, Hebron, Capernaum?  Thomas asked a legitimate question.  If they didn’t know where Jesus was going then they couldn’t possibly know the way there.  Hook, line, sinker.

10.  Philip went for broke (v8):  “If you’re going to the Father (wherever that is), Jesus, then take and show us, too.  That’s all we ask.”  Jesus assured Philip they’d been hearing and seeing the Father at work for already three years (vv9-11)!  Little did they know that Jesus had been renovating the temple all along.

Jesus was a carpenter, but he is not building any of us an indestructible Victorian.  He loves us too much for that.  He has entered into the very throne-room of God.  And he is making room on his seat for you.  Won’t you join him?