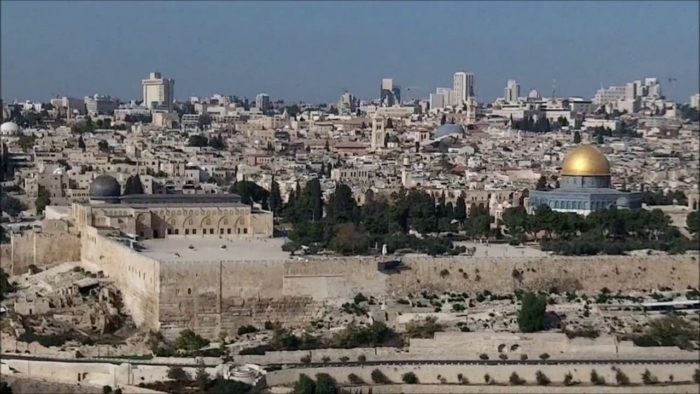 Earlier that day they left the temple complex and Jesus, rather matter-of-factly, buried the lede. Messiah wasn’t coming to raise Jerusalem and her beloved (and corrupt) temple. He was going to raze it. All of it. For good.

Just like that, Jesus declassified Israel’s most consequential state secret. And to a gang of misfits no less. Jesus proffered a plot twist no one saw coming. Such blindness, as it turns out, was the problem (see 23.16, 24, 26)! Naturally, his unwitting disciples had questions.

What follows we know colloquially as “the Olivet Discourse” (Mt 24.3-25.46). Jesus answered their questions and we’ve been fighting over them ever since. Perhaps the only idol more sacred than Jerusalem’s temple is our interpretation of Matthew 24!

Jesus wasn’t then and isn’t now trying to stump his followers. Jesus is hardly to blame if anything isn’t clear to us. He is not confusing us and certainly not provoking us against one another. Assuming he really intends to help us, perhaps we should read Matthew 24 simply, like children (cf. 18.3-4; 19.13-15).

We could organize the discourse along these lines:

Jesus pronounced the 7-fold woe on Israel’s religious leaders (Mt 23.13-36).  Their generational hypocrisy had exhausted Yahweh’s patience. He would soon impose the covenant curses on them. All these things (ταῦτα πάντα; i.e., the woes) will happen to “this generation” (τὴν γενεὰν ταύτην) of religious leaders (23.36). In killing The Prophet, they prove themselves the aggregation of every prophet-killing generation before them. As such they will suffer the culmination of the curses due them.

God’s judgment of the leaders would coincide with the destruction of Jerusalem itself, and especially the temple (vv37-39; cf. 1 Kgs 9.6-9). Israel at-large had followed their leaders in their hypocrisy and will largely reject Messiah as well. Jesus announced Israel’s worst fear: their temple (ὁ οἶκος ὑμῶν) would be desolate (ἔρημος). It was beyond repair and repentance. As foreshadowed by Ezekiel 14-15, Yahweh was leaving their earthly temple never to return (compare also Ezek 15 to Mt 21.18-22). The suffering Isaiah promised Gentiles in Isaiah 34 will in fact be suffered by Jerusalem/Israel, which had become its own haunt of jackals.

If the disciples heard what Jesus said in 23.37-39, they certainly didn’t think he meant what he would soon tell them.

The Greeks had their Seven Wonders of the World. The Jews had one: the Jerusalem Temple. The disciples got in one last look that day, freshly impressed with the majesty and grandeur of the temple campus (24.1; cf. Mk 13.1). “It’s all so wonderful, isn’t it, Jesus? If it’s this beautiful now, just wait until you clean it all up! Just you wait, Rome. Your gods have nothing on Yahweh’s house.”

But the temple had become a stumbling block (see Mt 21.12-23.12). It was no longer helping anyone toward salvation; it was actually hindering them.  Therefore, God would have actually have to remove it if he was to save his people.

Jesus asked them rhetorically if they had not seen “all these things” (ταῦτα πάντα) (24.2a). Obviously, they had seen the temple (!) so Jesus wouldn’t be asking, “Do you not see what you just pointed out for me to see?”

If “all these things” (ταῦτα πάντα) in 24.2 is connected to the same phrase in 23.36, Jesus was asking if they saw past all the “wonderful stones and buildings” (Mk 13.1). Did they see beyond the outer facade to the reality inside? Did they not recognize the temple symbolized the Pharisees themselves: “a whitewashed tomb full of dead men’s bones and uncleanness” (Mt 23.27). Outwardly righteous but inwardly wholly hypocritical and lawless (Mt 23.38).

Jesus promised the wholesale destruction of their beloved temple (24.2b). As indestructible the disciples assumed it was, not even one stone would remain in place. Luke tied this directly to Roman military action (Lk 19.43-44) which was fulfilled in AD 70 (but more on that later).

Jesus and his disciples arrived back at the Mount of Olives after what had to be a mind-blowing walk (v3)! If Jesus is Messiah, and Messiah comes to save Israel, then how could he devastate the temple and still establish God’s kingdom on earth?

Given the sensitive, incendiary, treasonous, blasphemous nature of what Jesus had just told them the disciples come to him privately (ἰδίαν). They asked three interrelated questions they assumed all concerned the end of the age and final judgment. In their minds, they’re really asking one question based on their understanding of Jeremiah 9, 11, and Micah 3. For them, the destruction of Jerusalem and the temple had coincide with the Son of Man’s coming, and that marked end of the age. What else could it be? What would be left except the Son of Man’s eternal reign over his people? Jesus must be talking about the end of the world as they knew it, which their ensuing questions assume (24.3).

Questions #2-3 are really one question tied together by the one “what” (τί):  What will be the sign of your coming (τὸ σημεῖον τῆς σῆς παρουσίας) and (καὶ) the end of the age (συντελείας τοῦ αἰῶνος)?

The end of the age” (συντελείας τοῦ αἰῶνος) is appositional to “the sign of your coming” (τὸ σημεῖον τῆς σῆς παρουσίας). What will be the sign of your coming which is to say the end of the age? The disciples do not assume two (or three) events, but one. When Christ, whom they readily confess as the eschatological Son of Man, returns this age ends and the Messianic reign begins.

Further, questions #2-3 are, as a unit, connected to question #1 also with and (καὶ). They are a piece of question #1 as well. In other words, the disciples assume they’re asking interrelated questions about one comprehensive world-ending event: the temple destruction, sign of Christ’s parousia, and the end of the age. In their minds, it’s all one cataclysmic experience.

Jesus answered their questions in the rest of the discourse. Stay tuned.