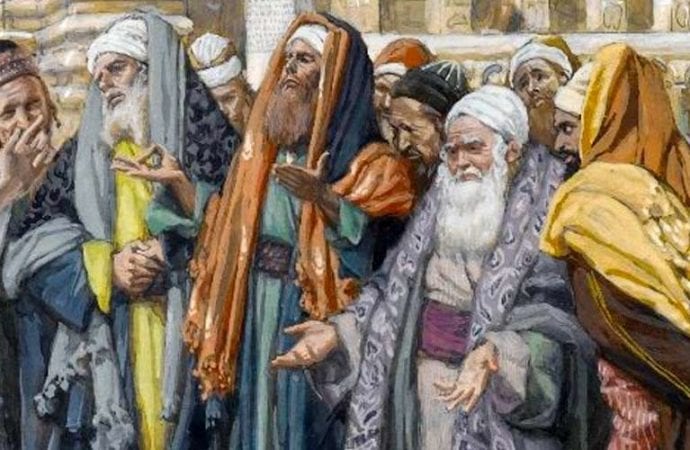 Woe to you pretenders.

Like a methodical boxer, Jesus had picked his spots throughout Matthew’s gospel. The Pharisees were slow-footed heavyweights who stomped and thudded and complained. For three years, they chased Jesus around the ring flailing about with empty haymakers.

Jesus bobbed and weaved with lightning quick jabs known as parables, word plays, and deft applications of the Law. He kept the Pharisees on guard but off balance and quickly became the crowd favorite (Mt 21.46).

The Pharisees changed strategy and started getting cute with Jesus (ch 22). Maybe with flattery and finesse they outwit him and win the crowd back.

The bell rang to begin Matthew 23.

Jesus changed strategy, too. As the Pharisees tiptoed toward him, he sprung from his corner with seven roundhouses aimed at the heart of Pharisaism. The fight was over by the end of that round. He stood over Jerusalem and started The Ten Count (13.37-24.2). Jerusalem would not get up.

Jesus exposed the Pharisees’ fundamental weakness: hypocrisy. The Pharisees had disguised this weakness from the people. They compensated for it through bully tactics, sleight of hand, threats, and feigned fundamentalism. In Matthew 23, Jesus stripped them of all pretense. Israel was a victim of veneer. Fooled by facade. Impoverished by imposters.

These days victimhood is the new virtue. Whatever might be my fault is first their fault. But hypocrisy is never someone else’s fault. We choose it even while blaming others for it. The glove Jesus lands on the Pharisee’s jaw lands on our nose as well.

Pretenders say, “If I can’t get the kingdom I want then no one else gets the Kingdom that is” (v13). The Pharisees opposed any kingdom where they weren’t the kings. They co-opted God’s name and glory for their own power. Anyone opposing them obviously wants an ungodly kingdom. “Watch out for this Jesus. He casts out demons by Beelzubul” (Mt 12.24).

If I can’t be the center of everyone else’s universe then I’ll make their lives miserable. I’ll discredit any sort of life that suggests I’m not necessary for it. This is why we get jealous when people enjoy Christ in ways we don’t. If they’re growing and I’m not, they must be doing it wrong.

Pretenders care more about conversion stats than people (v15). The Pharisees were 1st-century pyramid schemers. They pretended to care about people, but they really only cared about how many people cared about them. They loved their titles and headlining conferences (Mt 23.6-7). It’s all about Yahweh, they said.

Modern evangelism strategy tends toward the same mentality. That we actually describe evangelism as strategy exacerbates the problem! We love followers. We sign up a new convert and compel them to start peddling our methods. We obsess over statistics, records, and trends. How many people have we convinced are with us but we consider under us? We say it’s “all about Him” but in reality it’s about others commending us for saying it. It’s all about God when the pews and coffers are full. Let either thin out and pretenders feel threatened.

Pretenders parse and dissect definitions so they don’t have to mean what they say (vv16-22). The Pharisees split hairs to avoid getting trapped into actual holiness. They manipulated definitions (and the people who assumed them) to wield their profitable power. They micromanaged everyone else’s words while crossing their fingers behind their own backs.

The prosperity (false) gospel preacher insists his new mansion isn’t really about luxury. It’s about #blessed. The abusive pastor is simply prophetic, telling it like it is. I get lawyerly to shift blame in conflict. I never “technically” used that word but this word. Hypocrites love using phrases like “I never actually said” and “To use your words” and “I’m sorry you took it the wrong way.” We love parsing words rather than the people who use them. Somehow, hypocrites are able to turn slippery words around so it’s never their fault.

Pretenders love technicalities and substitute minutia for love (vv23-24). Pharisees tithed on every penny. Not even a spice escaped an offering! Meanwhile, they exploited the very people from whom they got the money. They hawk the tithe as vultures over the people.

How many churches suffer from the “Constitution and By-Laws” wonk who ignores Christ’s biblical command to love? When we don’t get our way, we resort to the trivial. To defend our turf, we proudly lift high and shake the church’s “legal” documents over the heads of brothers and sisters for whom Jesus died. We debate procedural minutia of church governance until technicalities overrule love. Then we have the temerity to describe the church split as the Spirit’s purifying work?

Pretenders convince others they’re for them to indulge their own egos (vv25-26). Pharisees used you in a way you didn’t know you were being used. What they said was an “offering” was actually theft. What they insisted was respect was “maggoty greed and gluttony” (The Message).

How easily we feign interest in others to indulge our own ego. People are projects and we are fixers. We swoop in with a sympathetic ear and compassionate wisdom, fishing for the eventual praise we get for doing so. We love hearing how we saved someone from disaster. We check social media hoping they’ve mentioned how vital our “ministry” was to them. When we’ve fixed them we move on to the next opportunity for self-indulgence. We help needy people only to serve our need to be needed.

Pretenders care more about appearances than substance (vv27-28). The Pharisees were masterful pretenders. They didn’t actually care about being righteous. They only wanted to be seen and talked about as righteous. They prayed like they were close to God without having to actually be close to him (Mt 6.5). They fasted like they were repentant without actually repenting (Mt 6.16).

If I can convince you I’m holy through buzzwords and carefully choreographed mercy then I don’t actually have to be holy or merciful when you’re not looking. We peddle self-righteousness masquerading as piety. You’ll think me holy to the degree I shame you into holiness. “Better than I deserve,” I say. “Glory to God,” I’ll insist. “I’m praying for you,” or so you’ll think. All the while, I’ve skirted the actual substance of true righteousness (cf. Jas 2.14-17)..

Pretenders virtue signal with misplaced bravado and contradictions (vv29-33). The Pharisees feigned lament for their beloved prophets. If only they’d been there they could’ve done something. But the only reason there is a monument is because they killed the prophet to whom it’s dedicated. Meanwhile, by admitting their fathers killed the prophets, the Pharisees confessed to being sons of prophet-killers! Out of one side of their mouth they glory in their heritage to exert power. Out of the other they contradictorily condemn their heritage to garner sympathy. While laying flowers at the tombs of Isaiah, Jeremiah, Ezekiel, and Daniel they were conspiring to kill The Prophet!

Virtue signaling is a sold-out show. It’s quite popular to act like we’d never be like those people. We’re enlightened. We’ve evolved. We’re on the right side of history now. We’ll blame the ism out there while ignoring the ist in me. And we fight over the high road with one foot on the low one.

I can’t hate their racism while nursing my own version of it. I can’t insist on “equality” when what I actually want is in inequality tilted in my favor. We shake our fists with popular conviction but wink at our unpopular contradictions. My speck is nothing compared to their plank (Mt 7.1-5). In fact, I only have a plank because of their speck.

Hypocrisy requires keeping distance. Distance from God and from people. From a distance, a lake appears deep. Up close, we find how shallow it is. Hypocrisy is to live a shallow life at at arm’s length from everyone so they think we’re deep. Always one step ahead of the meddlesome question. One step behind the prevailing winds.

Jesus assigns a place for hypocrites (24.51). In that place there will be weeping and gnashing of teeth.

Let’s throw in the towel before the next bell rings.