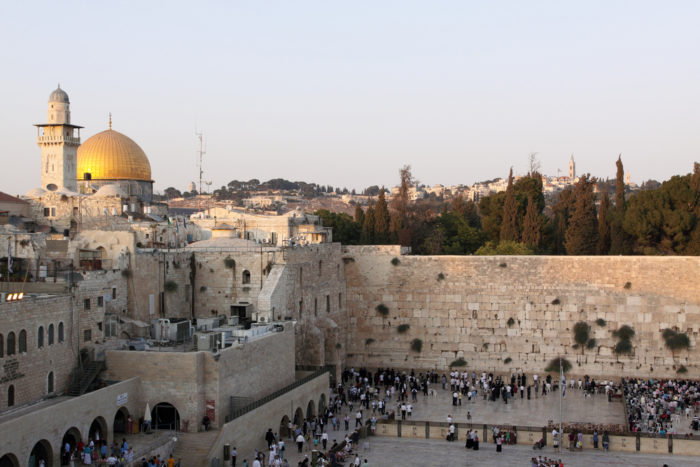 In Mt 24-25, Jesus set his disciples’ expectations about the end of it all. The end of the age would be an age of the end. The disciples assumed there would soon be a cataclysmic event to inaugurate Messiah’s reign. Wanting to be prepared, the asked Jesus about signs and times (24.1-3).

Before giving any specifics about either of those bookends, Jesus set the trajectory of life before his parousia (vv4-14). In all times in all places, his followers will undergo severe testing. There won’t a pep rally before he returns. Rather, there will be a Satanic offensive against his disciples. We’re now 2,000 years into it and counting.

Having sufficiently warned his disciples about a difficult future, Jesus then prepared them in vv15-35 for when “not one stone [of the temple] will be left upon another” (v2). He answered their first question: when will “these things” (i.e., the toppling of the temple) happen? We know that event happened in AD 70 after several years of militaristic Roman pressure. But at the time Jesus taught this there was no “AD 70” because we didn’t have our modern calendar yet! He gave them a story with signs, not dates with a countdown.

Jesus promised a future “Abomination of Desolation” (βδέλυγμα τῆς ἐρημώσεως) about whom Daniel also prophesied in Dan 11.31; 12.11. Antiochus Epiphanes likely fulfilled Daniel’s prophecy in 168 BC, when he ransacked and desecrated the temple, inciting the Maccabean revolution.

Jesus’ disciples would’ve obviously known the gravity of that event (hence the parenthetical note for the reader to pay attention). Americans might characterize the proportion of an imminent event as “another 9/11” or “Pearl Harbor.” Likewise here, Jesus described the destruction of the temple in the most horrific terms a Jew could fathom.

In 23.38, Jesus promised to leave Israel’s house (temple) “desolate” (ἔρημος) which prompted the disciples’ first question. The temple would be made desolate by a ruthless military figure (cf. Lk 21.20).  When the disciples saw Rome moving its armies into Jerusalem, they will know the temple is soon to be desolated. In AD 66-70, Rome mercilessly ended any hope of another Jewish uprising. Finally, in AD 70 they burned the temple to the ground.

Like Sodom and Gomorrah, there will be no time to prepare (vv17-20). Wives at home will have no time to pack a few things on the way out (v17). Husbands at the office will have no time to run home before getting out of town (v18). It will be hard for those pregnant or needing strollers to escape fast enough (v19). They should beg God this happens during the Spring and during the week (v20). Otherwise, they will be in an impossible fix.

This “great tribulation” (θλῖψις μεγάλη) will be unprecedented in Israel (v21). Virtually impossible to believe, it will be worse than 586 BC and 168 BC. And unless God mercifully intervenes, Rome would wipe out every single Jew (v22). But for the sake of his believing elect, God will indeed restrain the horror.

There will be false Christs who take advantage of the situation (vv24-26; cf. vv4-5, 11). They will claim to be Messiah to defeat Israel’s enemy and protect Jerusalem, even attempting to persuade the elect. For a “seed,” of course. That they are “in the wilderness” and “in the inner rooms” (v26) means they are cowardly and secretive. Nevertheless, many will follow them out of desperation.

Jesus assured his disciples that his return will be unmistakable (vv27-28). There will nothing clandestine or questionable about it. Therefore, they need not fall for the false Christs whose appearing is limited and requires explanation. When the Son of Man returns, it will be as clear and obvious as sky-ripping lightning. The sign of his coming is his coming!

In Luke’s account, the disciples then ask Jesus where his return will happen (Lk 17.37), which indicates they’re getting it. His return is likely separate from the events surrounding the temple’s desolation, however. Jesus echoed Hab 1.8; Job 39.27-30: his return would usher in the final judgment (cf. Rev 19.17f.).

Immediately after the tribulation of those days (τὴν θλῖψιν τῶν ἡμερῶν ἐκείνων), the Son of Man’s sign (σημεῖον) will appear in the sky and announce his arrival in power and great glory (δόξης πολλῆς) (vv29-31).

Clearly, either Jesus speaks of his bodily return in final judgment at the end of the age (parousia) or some type of “return” in AD 70 that foreshadows or typifies his parousia. While the modern impulse is for the former, I humbly submit he spoke of the latter. For those prepared to see it, Jesus “comes” in one sense through Rome in AD 70 that demonstrates his absolute authority over apostate Israel and her corrupt temple. Here are a few reasons to consider:

1. Matthew sandwiched vv29-31 between events that are signaled (vv15-26) and the fig tree parable reinforcing the exhortation to pay attention to the warning signs (vv32-35). Therefore, on natural reading, vv29-31 are also part of the AD 70 narrative rife with noticeable alerts.

2. There could be a subtle contrast between “those [plural] days” (τῶν ἡμερῶν ἐκείνων) that can be known and anticipated (v29), and “that [singular] day” (Περὶ δὲ τῆς ἡμέρας ἐκείνης) which isn’t known or even predicted by Jesus himself (v36). Therefore, Jesus spoke of “days” about which he “told you in advance’ (v25), which his followers can predict—AD 70. And then of another “that day” which not even he knows—his parousia (24.36-25.46).  Vv29-31 are situated in the “those days” section.

What did Jesus mean by “those days” (τῶν ἡμερῶν ἐκείνων) in v29. Since he referred to the events in vv14-28 as “great tribulation” (θλῖψις μεγάλη), the natural reading of v29 is that time period: after the unprecedented great tribulation, i.e. the destruction of the temple and God’s judgment on Israel.

Isaiah 13
Yahweh promised to bless Babylon in order to judge unrighteous Jerusalem. Yahweh was coming “in Babylon” to judge Jerusalem. In other words, when Israel saw Babylon invading Jerusalem they should know it was Yahweh leading the charge. And, in fact, he promised then to “make the land a desolation” (שַׁמָּה; ἔρημον) (v9). Babylon’s destruction of Jerusalem in 586 BC would be a type of the Day of Yahweh described as cosmic upheaval (v10).  Likewise, it could be that God would visit Israel in judgment the final time in AD 70, using Rome in the way he used Babylon.

Isaiah 34
Yahweh’s wrath would be poured out on “all the nations” (v2) and specifically Edom (v6). The entire cosmos (the astrological substance of false gods) will shrivel up (v4). He will establish a holy Zion.

Daniel 7
Daniel saw the Son of Man “coming” (LXX: ἤρχετο) “with the clouds of heaven” to the Ancient of Days (v13). The Ancient of Days granted the Son of Man an invincible worldwide kingdom of all peoples, nations, and languages. When Jews see Jerusalem smoldering in ruins, they will know the Son of Man has executed his promised judgment on them and given Yahweh’s kingdom to the nations-saints (see 23.37-39). This need not refer to literal seeing Jesus in the sky, but seeing the fulfillment of Dan 7.

Isaiah 27
From the Euphrates to the brook of Egypt, Yahweh will execute his judgment and “gather up” his people along the way (v12).  A “great trumpet” will announce his victory and summon the Assyrian and Egyptian exiles back to Jerusalem (v13).

3.3. What is “the sign of the Son of Man” (ὸ σημεῖον τοῦ υἱοῦ τοῦ ἀνθρώπου) that will appear in the sky/heaven (v30)? “Then” (τότε) places this sign contemporaneous with the judgment event in v29. Could this be an astrological ominous sign obviously visible to everyone around Jerusalem (cf. Rev 12)? Whatever the sign, the “tribes of the earth” (πᾶσαι αἱ φυλαὶ τῆς γῆς) will mourn (κόψονται) when they see it. Jesus echoed Zech 12.10-14 where Israel’s families mourn when they realize they’ve wounded their Messiah. In AD 70, while watching the temple burn to the ground, regretful Israelites who condoned Jesus’ execution will woefully witness this sign and its corresponding earthly fulfillment.

The fact that Jerusalem’s temple remains in ruins still testifies to Christ’s words, power, and glory. The sign of the Son of Man still appears!

3.4. How will the Son of Man send his angels (τοὺς ἀγγέλους) to gather (ἐπισυνάξουσιν) his elect (τοὺς ἐκλεκτοὺς αὐτοῦ) from all the world in AD 70 (and God’s judgment of Israel)? In what way did the Son of Man do this in AD 70 that isn’t necessarily the final end-time assize?

Jesus echoed Dt 30.4 and Zech 2.6 where Yahweh promised to gather Israelite exiles. Zech 2.6 specifically mentioned the “four winds” to which the exiled had been scattered. Here Jesus promised to gather the elect from all the world, not just one nation.

The only other Matthean use of ἐπισυνάγω (gather) is in 23.37, where Jesus bemoaned Jerusalem’s resistance to being “gathered.” They would not assemble under the reign of their Messiah. If Jerusalem refuses Messiah, she will be judged. And the Son of Man will gather his chosen people from all the (other) nations. The emphasis; therefore, isn’t on when the angels gather the elect, but who the gathered elect are in contrast to unbelieving Israelites (cf. Is 11.12). Messiah will populate his kingdom with people from one of the sky to another (v31), which echoes the lightning traveling from east to west (v27). The “lightning fast” advance of the kingdom is also part of the Son of Man’s power during the age of the end.

Jesus used the budding fig tree to illustrate there will be signs that presage three related events (vv32-35): his imminent arrival (v33), the completing of “all these things” within that generation (v34), and the passing away of heaven and earth (v35). All three describe the events of AD 70. The springtime swelling branches of a fig tree illustrate vv15-26: the burgeoning omens of Jerusalem’s final judgment. “Summer” illustrates vv29-31: the Son of Man’s destruction of Jerusalem.

1. Jesus used “all these things” (πάντα ταῦτα) in vv33-34 to summarize the warning signals preceding his nearness described in vv29-31 and the passing away of “this generation” (ἡ γενεὰ αὕτη).

Both of these terms (“these things” and “this generation”) link to 23.36 where Jesus announced God’s judgment on Israel’s hypocrisy. The seven woes (i.e., “all these things”) will come upon “this [hypocritical, unbelieving, wicked] generation [of Israelites].”

This makes perfect sense when squared with the events of AD 70. Within 40 years (a generation), God will visit “woe” on Israel/Jerusalem/Temple and many of his unbelieving hearers will witness it with their own eyes. Vv29-31 therefore must be included in “all these things” πάντα ταῦτα.

Jesus clearly says not even he or the angels know the timing of “that day” (τῆς ἡμέρας ἐκείνης) (v36). There will be no warning about the Son of Man’s bodily coming in final judgment (παρουσία) (v37). But he clearly indicated in vv32-35 the day of Jerusalem’s destruction can be known and anticipated. There would be numerous signals to which his followers must pay attention as they do the budding fig tree. And those signal some sort of “coming” of the Son of Man (vv29-31).

2. All these things (πάντα ταῦτα) announce “he is near, right at the doors” (ἐγγύς ἐστιν ἐπὶ θύραις). That is, when you see v15 and all the concomitant events, his disciples can know Yahweh’s judgment is imminent. The woes of 23.13-39 are happening. As the Abomination of Desolation stands in the holy place, he does so as Christ’s agent. In a Babylon regalia, Jesus will be standing at the doors (perhaps of the temple as envisioned in Ezek 9) carrying out God’s judgment of Israel.

3. In what way did heaven and earth pass away in AD 70? The temple was the nexus of “heaven and earth,” where Yahweh dwelled with his people.  Heaven and earth met in the Holy of Holies. Jesus promised even it would “pass away” (παρελεύσεται) while his powerful word (of judgment) remained.

The Jerusalem temple remains desolate to this day. The temple has passed away. The Abomination of Desolation still occupies the holy place. And the Son of Man’s words still echo off its golden dome.